Photo: Raymond Kirlew stands at the entrance to a cave that he discovered in his backyard three years ago. - Photo by Paul Williams

In July 16 and 23, 2007, we told the story of how Raymond Kirlew, of St Ann, helped to nurse his wife, Yvonne, back to health when she had cancer of the lymph nodes.
It was a poignant love story that softened the heart of the toughest man, but it took a bittersweet turn last year when they were told the cancer had come back.

"She has been going for tests routinely every three to four months to make sure the cancer (lymphoma) remains in check. Up to March 2009, Yvonne's test results were basically the same. In fact, we went on a Caribbean cruise with two friends in April 2009," Raymond Kirlew said.
But between December 2008 and March last year, Yvonne was feeling pain and having frequent nerve spasms in her limbs. From March 22 to 26, she underwent a series of tests. Continued medication and shock treatment for the nerves that were damaged by chemotherapy were suggested. They decided against the shock treatment.
However, the pain and the spasms in the legs continued, accompanied by night sweats.

More tests and examinations, including a brain/body CT scan, were done between June 23 and 28 in New York.- Cancer movements were detected and a detailed positron emission tomography (PET) scan was recommended to be done as soon as possible.
By now, Yvonne was feeling pain in her limbs, abdomen, groin and lymph nodes.

July 28 to August 2 saw her undergoing the PET scan and blood tests.
The PET scan is a unique type of imaging test that helps doctors see how the organs and tissues inside the body are actually functioning.
That examination, done at the end of July, was conclusive. Cancer was once again invading Yvonne's lymph nodes. And to find out how fast it was moving in order to determine when chemotherapy would have started, the doctor ordered another scan.
Slow movement of the cancer cells was detected. A month's monitoring and administering of chemotherapy as needed were suggested.

Cancer returns
"Together, Yvonne and I started contemplating what arrangements to make regarding starting and continuing the chemotherapy treatment," Ray said.
"When Yvonne started to have restless nights and cold sweat, I feared the worst. I also prayed for the cancer not to come back. Then my fears turned into my worst nightmare. The dreaded cancer had returned. I was so devastated. We all know that when cancer returns it is harder to treat."

Yet, things took a strange and positive twist when Yvonne's sister sent Ray an email. The message contained information claiming that the leaves, stems and bark of the soursop tree could cure cancer.
"I had also started seeing several articles on this miracle fruit and set about reading and researching these claims. One claim said that it was 10,000 times stronger than chemotherapy and did not harm good cells," Ray said

"I got so convinced of its power, I advised Yvonne to try it. It couldn't hurt, I thought. Moreover, since she has hypertension and nerve spasms, it should help as I read that it also lowers blood pressure, and repairs damaged nerves.
I thought, 'This is too good to be true'," he recalled.
Fact or fiction, Ray set about to cure his wife once again.
"He convinced me to try it; I consented.


He boiled leaves and bark from a tree in our yard.
The taste was awful and I hardly slept due to all the pain I was in. I decided not to take any more, but after Ray suggested that the pain may have been a result of the soursop fighting the cancer, I continued to drink the mixture, sometimes diluting it with other juices to disguise the taste," Yvonne said.
"After a while, it was easy to swallow without dilution. After taking the soursop tea about three times a day, the pain started to subside and she got less and less spasms over time.
After a month, she felt no pain in the areas where they once were prevalent," Ray added.
There was no room for complacency, however, and more check-ups took place from September 20 to 24 in order to decide when the chemotherapy would have started.

Good news
A call from the doctor to hear the results of the lab tests did not come as expected after three days. Two more days, and nothing. Afraid of hearing some bad news, Yvonne didn't call either, but Ray did. And a baffled (häkeltynyt) doctor told him the cancer movement had stopped. Joy, unspeakable joy, was what the lovebirds felt.
"Yvonne returned in November 2009 for a check-up. I visited both doctors (oncologist and general practitioner) with her, bringing some soursop leaves along to show them what Yvonne had been drinking. The GP was amazed that no chemotherapy was necessary.


A blood test was ordered for Yvonne.
The doctor called three days later to advise that Yvonne's blood was perfect ... So far (January), she is still without pain.

She is due for a check-up in March," Ray told The Gleaner.
For now, Yvonne has no doubt that her seemingly cancer-free system is due to the 'medicine' extracted from the bark and leaves of the soursop tree in her yard.
"I had suspected in the past that the soursop had some medicinal worth because whenever I occasionally drank the fruit juice, I became drowsy and my blood pressure fell significantly.
"Having myself experienced the other amazing properties of this remarkable plant, I have become a believer in its inherent, God-given properties. I am hopeful that the cancer will eventually be defeated and, if and when it does return, that it can at least be halted, thereby extending life," Yvonne said.

A quick search on the Internet revealed many links making claims about the healing powers of the soursop tree. There is even an article published in The Gleaner on Thursday, June 25, last year, about such claims.
The headline is 'Soursop: a natural cancer killer' and the source is listed as
http://graviola.fi/Graviola-10000-kertaa-tehokkaampi-kuin-Adriamycin/ (PMID:  8991944)

"When I got the news about the soursop treatment I was over the moon with joy.
As of now, the cancer has been stopped in its track; both of us are very happy.
Every day we pray that this dreaded disease does not return, but if it does, we just have to face it head-on. As a husband and a friend, I'm committed to help Yvonne defeat this monster, with God's help," Raymond declared in retrospect. // paul.williams@gleanerjm.com 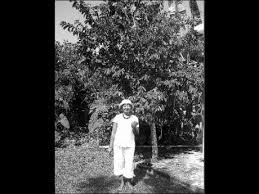 Yvonne Kirlew stands in front of the soursop tree in her backyard at Discovery Bay, St Ann.
She claims the concoction that her husband, Raymond, made from the leaves and bark of the tree killed cancer cells in her lymph nodes.
_
http://jamaica-gleaner.com/gleaner/20100118/news/news1.html
_
Google -konekäännös artikkelista 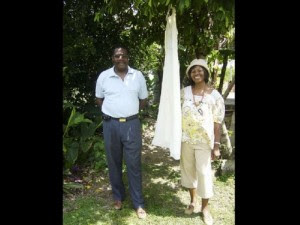 Clinically diagnosed with lymphatic cancer, also refereed to as Hodgkin’s lymphoma, in late 2002, Yvonne Kirlew had undergone an excruciating round of chemotherapy which only left her with pain and nausea in her attempts to eliminate the cancer cells.
Instead of helping Yvonne get better, the chemotherapy was making her worse. She went as far as actually planning her own funeral. However, Ray Kirlew, Yvonne’s husband was determined that the woman he planned to spend the rest of his life with was not going to leave his side. He nursed her back to health and by December 2004, it appeared that Yvonne was cancer-free.
A Jamaican based newspaper known as the Gleaner, shared their story in a two-part program in July 2007. An updated story was released in January 2010 with the news that the cancer had returned between December 2008 and March 2009.
Yvonne became ill once more and the dreadful chemotherapy was recommended. It was around this time that Ray received an email pertaining to the cancer-curing qualities of the soursop tree. After more research, he was transfixed by what he discovered. At the time, he did not possess any legitimate proof, yet he still set out to create the leaves and bark of the soursop tree into a remedy which would eventually kill Yvonne’s cancer cells.
Following much persuasion from Ray, Yvonne consumed the remedy and became sicker at the start, and declined to consume any more, but Ray encouraged her to do so. Following nearly a month of remaining on the remedy, Yvonne’s health improve enormously. Amazingly, according to examinations in September 2009 to ascertain once chemotherapy would begin, actually displayed that the spread of the cancer cells had stopped.
Several doubters, some of which stated it was just a matter of time before the cancer comes back. Others doubted Ray’s intellect, or lack thereof, for supplying the soursop remdy to his wife, considering the notion that he is not a medical practitioner. However, Ray says once the story was released, numerous individuals, especially medical doctors themselves, have connected with him, searching for knowledge on just how to produce the remedy.
Ray states, “Everyone who has contacted me concerning this soursop treatment, I have never ever asked for a penny, nor have I got a penny, and was not expecting any. I know for a fact that this thing has saved my wife, and whosoever wants to know how to make it, I would be happy to give them that information.”

Ray spoke of a story of a woman he knew personally, who was diagnosed with lung cancer and was literally sent home to die once the cancer had spread to additional organs. Currently, she is living her life cancer-free after consuming the soursop remedy.
Ray and Yvonne possess zero regrets. They are certain that Yvonne is currently alive and well due to the capabilities of the soursop tree.

Yvonne has some choice words to say to her naysayers. “I would say to them that the same way chemotherapy is used in treating cancer patients, it was more than likely discovered by people who were trying to find a cure. By testing these treatments over a long period of time, people were healed, even temporarily … . I am one of the lucky ones, I think, because I tried something that may not have been proven, may not be in the medical books, but I tried it and it works for me.”
It appears to have worked wonders for Yvonne in numerous other ways as well. “I also had a problem with my blood pressure. I have a tendency to have high blood pressure, and whenever I take the soursop drink, my pressure is down … . I am convinced that the soursop helps to kill the cancer cells, lower my blood pressure, and to repair the damaged nerves,” she said.
In 2003, the chemotherapy that she had undergone had damaged some of her nerves. She began having issues with her coordination.
It is about ten years since Yvonne, whose mother, father and brother had died of cancer, was diagnosed, and nearly 2 years since she began consuming the soursop mixture. Recently, she traveled to New York to have additional tests performed on her. A week prior to her leaving, she experienced some pain within some of her major lymph nodes and was slightly nervous upon leaving the island. Now that she has returned, she has a clean bill of health, and the pain has disappeared.
She currently has the dress she had anticipated to spend eternity in. It’s located inside her closet, still unworn, clean, and stylish. The only difference from today compared to the day she bought it, she has no plans to wear it anytime soon. And even so, she said it might just be too small.