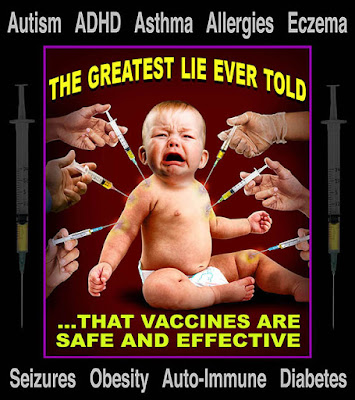 You might want to sit down for this one.

The government is not quite known for always being on the up-and-up when it comes to reporting certain information and making public what the public deserves to know.
- Information in documents has been blacked out with marker, loopholes change with the wind and doublespeak runs rampant.
That, we know.
Here’s the part you should sit down for, because a rare admission has just been announced by the government and — gasp — it has to do with that V-word, vaccinations.
The U.S. Department of Health and Human Services (HHS) has made public a rundown of health conditions and associated vaccinations, charting out a slew of health consequences that are likely to result from getting such shots.
Aptly titled the “Vaccine Injury Table,” the information appears on the National Vaccine Injury Compensation Program portion of the HHS site. It succinctly breaks down what’s likely to happen to an individual in the event they’re given certain vaccinations.


HHS: Get certain vaccinations, risk possible anaphylactic shock, death
Introductory information that precedes the table, says,
“…if you received the tetanus vaccines and had a severe allergic reaction (anaphylaxis) within 4 hours after receiving the vaccine, then it is presumed that the tetanus vaccine caused the injury if no other cause is found.”

Considering the great deal of wishy-washy statements offered by the government, mainstream media and those who subscribe to their expertise on the subject, this statement is as close to an admission that vaccinations are detrimental to health that we’ve read from the government.
The HHS table goes on to outline very specific ailments that are linked to particular vaccines. For example, the chart explains that the tetanus shot is linked to anaphylaxis or anaphylactic shock, which can occur within four hours of injection. The exact scenario can also unfold with the MMR or hepatitis B shot.

Death, disability and injury are also listed as possible outcomes of receiving such shots, although the time period for those specific results cases comes with evasive “not applicable” wording.
The table is an important step in that the government is publicly showcasing the horrors that can unfold at the hands of vaccinations. It shatters previously-held “all vaccinations are safe” mentalities, laying out in plain sight the toll such injections can take on a person.

Like dominoes, many organizations still continue to push notion that vaccinations are OK until everyone falls in line
However, there are still those running around with their hands covering their ears, drinking the Vaccination Kool-Aid.


It’s like a game of mental dominoes. What happens to one quickly becomes the mind set for others who quickly fall in line at the hand of those in control. In this case, we’re talking about pro-vaccination folks who have jumped on the “vaccinations are safe” train, following the path of those that came before them and, like out of control dominoes, mow others down with thoughts that it’s OK for humans to inject one another with toxins.
Here’s an example of how this works:
On the portion of its web site that talks about influenza, the World Health Organization (WHO) states that “Vaccination is the most effective way to prevent infection and severe outcomes caused by influenza viruses.”
Then the American Academy of Pediatrics’ (AAP) site embraces this “WHO said it, so it must be true” mind set, saying on their own site that WHO reviewed the AAP’s Immunization Web Site, suggesting that the information presented must therefore be true.

As such, the AAP’s site says that “Vaccines contain many ingredients that make them safer and more effective, including preservatives, adjuvants, and other ingredients.” Since when were preservatives and mysterious “other ingredients” considered safe?
What’s more disturbing is that this statement appears just below their subhead titled, “Thimerosal, Aluminum, & Other Ingredients.” Looks like the AAP needs to take a Thirmerosal 101 class; it contains mercury and is used in vaccines! Enough said. But then again, WHO reviewed this information, so we can all sleep better at night knowing that the vials of toxins that await us at our local supermarket pharmacy are A-OK.
As with anything that impacts our health, it’s important to stay informed. Continually ask questions, stay informed by reading what’s reported on NaturalNews and do what’s in the best for your ethical standards and overall health.