When the Disneyland California measles outbreak occurred, the media reported this to the public as if the US were on the verge of the next bubonic plague. But, according to the Centers for Disease Control (CDC), there were a total of 169 measles cases in 20 different states during the widely sensationalized outbreak. 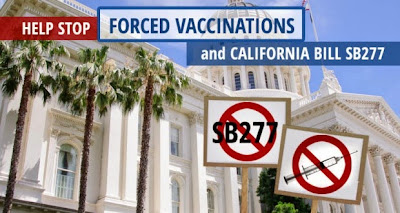 That’s about 1 case for every 2 million people.
Not one person died, and there were no reports of serious complications from the illness.
In fact, the U.S. hasn’t seen a death from the measles in over 12 years, since 2003.
However, the real epidemic sweeping across America right now is the recent slate of legislative bills designed to remove philosophical and religious exemptions to vaccinations with approximately 110 bills introduced in 36 states so far.
If these bills were to become laws, they would literally force parents to vaccinate their children with products containing known carcinogens and other toxins, denying them their rights to parental choice regarding medical procedures with known risks.
A False Crisis
In an apparent response to a false crisis, California Senators Richard Pan and Ben Allen have introduced Senate Bill 277 (SB 277), legislation that requires all children to obtain every vaccine on the CDC schedule as a precondition for attending school in California. This is a suspect approach to a perceived “problem,” as the state of California currently has immunization rates at or above the national average.
In fact, over the past year, the number of personal belief exemptions has decreased due to another bill Senator Pan authored in 2012, AB2109. This bill made it more difficult to get a personal belief exemption by requiring parents to meet with a medical doctor if they chose to opt out of vaccines prior to enrolling their children in school.
California currently claims a 96.1% vaccination rate for the Measles, Mumps, and Rubella vaccine, (MMR) which exceeds the rate the CDC claims is necessary to protect the population. Despite decreasing exemptions and higher vaccination rates, Senator Pan continues to blame unvaccinated school children for recurring episodes, even after the CDC reported the recent outbreak was most likely “imported” from someone visiting California from another country.
Vaccinations and Injury
Plenty of parents who see their parental rights threatened by this bill are upset. Their argument is that the vaccines are not proven to be as safe and effective as the CDC claims, and they’ve got some weight behind that argument.
The Institute of Medicine states that “No vaccine is perfectly safe or effective, and vaccines may lead to serious adverse effects in some instances.” The U. S. Supreme Court ruled vaccines “unavoidably unsafe” and established the National Vaccine Injury Compensation Program (VICP) in 1986 – which while making pharmaceutical companies immune from any and all liability, also makes clear that people are routinely injured by vaccines and eligible for compensation. In fact, Federal courts have awarded approximately 3.5 BILLION dollars to victims of vaccine injury!
And the very existence of the Vaccine Adverse Reporting System (VAERS) stands as a testimony to the inherently unsafe nature of vaccines. Thirty thousand (30,000) vaccine reactions have been reported, and up to 4,000 of these vaccine injuries reported each year are severe side effects that lead to hospital stays, lifelong disability, and death.
Parents vs. Government: Who Really Knows Best?
When it comes to vaccinations, who should call the shots? Some parents believe it is they who have that right and are angry with a government that is forcing toxic substances on their children, particularly since there is no actual health emergency in the US. Those who object to SB277 and other mandatory vaccination laws believe the bills are unconstitutional and a violation of their rights to life and liberty.
But it certainly doesn’t mean that these parents aren’t concerned for the health of their children.
It is quite the contrary!
The ever growing vaccine schedule, which has more than tripled in the last 20 years, has coincided with increased diagnoses among America’s youth for autism, learning disabilities and chronic illness – not to mention cancer, which has taken its place as the leading cause of death by disease in children beyond infancy.
What might be the links between vaccines and cancer?
The CDC hasn’t given us any hard evidence, but the exponential increase in childhood cancers has coincided with the explosion of vaccinations in this country. Vaccines are not tested for carcinogenic effects, but with many containing known neurotoxins like aluminum and mercury, why aren’t they?

And if carcinogens in foods can lead to cancer, why wouldn’t injecting carcinogens directly into the bloodstream?
Maybe there’s something the CDC isn’t telling us!
As concerned as these parents are about the inherent risks of vaccinations, they are equally in favor of pursuing natural means of disease prevention and establishing foundations for lifelong health – without the added burdens of toxins being injected into their children. Mostly, these parents are in favor of having the right to make these decisions for their children, and not having to comply with government mandates that would put their children at risk.
Take Action Today
The video below shows Los Angeles parents at city hall sharing their thoughts and concerns about SB277.
You don’t need to live in California to take action. Go to National Vaccine Information Center, subscribe to their free newsletter to stay informed about legislation in your state. Also, please share this article with others and let’s ban together to help stop forced vaccinations and fight for our health freedom rights, especially for our children.
Share this article and please help stop SB277 and other bills which violate our rights to informed consent. Don’t wait. Take action today.
References:
Measles Outbreak — California, December 2014–February 2015Measles Cases and OutbreaksEpidemiology of Measles — United States, 2001–2003USA’s 4th Leading Cause of Death – Pharma’s DrugsImmunization Action CoalitionLogin is Required to Enter the NVIC State Advocacy PortalLEGISLATIVE COUNSEL’S DIGESTAB-2109 Communicable disease: immunization exemption.Community Immunity (“Herd Immunity”)Herd immunity and measles.Health Guide: Vaccine ResearchSurveillance for Safety After Immunization: Vaccine Adverse Event Reporting System (VAERS) — United States, 1991–2001The JAMA Network ReaderVAERS DataConscientious Choice and Informed Consent for Vaccination are Parental RightsCancer in Children and Adolescents
_
http://thetruthaboutcancer.com/forced-vaccinations-bill-sb277/