German authorities already have the legal means to fine parents who choose not to vaccinate their children — but reporting those parents had been left to the discretion of schools. 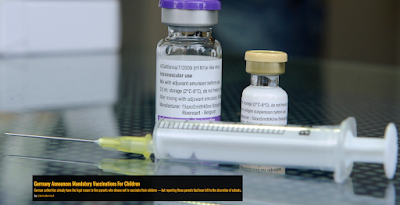 A two component vaccine against swine flu is seen at the pharmacy of the
university hospital in Essen, Germany. AP/Martin Meissner)

Fines of up to €2,500 ($2,800) could await parents in Germany who fail to vaccinate their children, as panic and an ongoing outbreak of measles spread like wildfire across the nation.
Last week, a 37-year-old mother of three succumbed to the highly-contagious illness in North Rhine-Westphalia — and that troubling portent has officials rushing to quash the epidemic by requiring kindergartens to inform health authorities if parents do not receive vaccination counseling.
Noncompliance could find children expelled.
“Nobody can be indifferent to the fact that people are still dying of measles,” asserted Germany’s Health Minister Hermann Gröhe, reports Bild, adding the tightening of laws surrounding inoculations will be imperative, due to the widespread outbreak.
In March, the BBC reported “measles had become endemic (meaning that it is self-sustaining, continuing to spread within the country) in France, Germany, Italy, Poland, Romania, Switzerland and Ukraine,” as Forbes paraphrased. “The worst measles outbreak is in Romania, which reported over 3,400 cases and 17 deaths in just the first 3 months of this year.”
By the middle of April, Germany had 504 reported cases of measles in 2017 — up from just 33 in the same time period the previous year, and already in excess of the 326 cases reported for the whole of 2016.
German authorities already have the legal means to fine parents who choose not to vaccinate their children — but reporting those parents had been left to the discretion of schools.
Notes the BBC, the “upper house of the German parliament, the Bundesrat, said forcing kindergartens to report some parents to the health authorities might breach data protection laws.”
European officials appeared to lay blame for the insidious epidemic squarely at the feet of the vaccine awareness and anti-vaxx movements, following the worst measles outbreak in two decades in 2015.
Italy, however — which has thus far experienced a threefold increase in reported cases, compared with last year — took requirements about inoculation a step further than Germany.
Last week, Italian politicians mandated vaccination against 12 common infectious diseases — measles, polio, whooping cough, meningitis, and hepatitis B, among them — for youngsters through age six before they would be permitted to enroll in State-operated schools.
Italian officials excoriated what they termed “anti-scientific” theories on vaccination, such as a possible but as-yet unproven link to autism, for a decline in children receiving measles and other shots — a sufficient gap as to be conducive to an outbreak of this magnitude.
While authorities from a number of European nations lambasted parents for putative negligence in failing to vaccinate kids against measles; but, as the BBC reports, the World Health Organization noted only around 5,000 cases across the continent in 2016 — the lowest total ever recorded.
Italy and Romania are experiencing the brunt of the measles epidemic this year, according toWHO.
Vaccines have come under fire in recent years in the United States, as the list of inoculations recommended for children grows lengthier by the year.
Parents opting not to follow the vaccine schedule cite a number of reasons, including a highly disputatious theory the shots might cause iterations of autism spectrum disorder, as well as the basic premise interactions between the disparate inoculations have not been fully examined.
As the vaccine debate — deemed an exercise in recklessness, by both sides — continues to heat up, governments seem increasingly prone to wresting that decision from parents, and taking up the cause for what they say is the good of the public’s health.
German parliament will likely adopt the measure on June 1.
https://www.mintpressnews.com/germany-announces-mandatory-vaccinations-children/228440/