Saying that a patient is “cured” of the virus doesn’t necessarily mean that it’s been completely eradicated from the body. 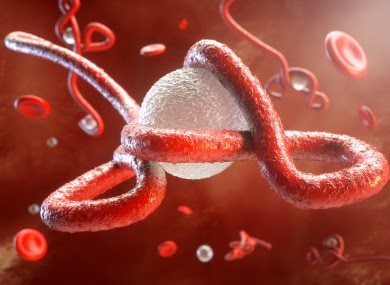 ONE OF THE biggest mysteries surrounding the Ebola virus is its ability to hide out in survivors’ bodies and evade detection by the immune system.
This “trick” of the virus became abundantly clear last week when Scottish nurse Pauline Cafferkey was readmitted to a London hospital on October 9 in ‘serious condition’.
This was a full nine months after doctors said she had made a full recovery from Ebola.
“The virus, several experts said, managed to somehow persist and apparently re-emerged to cause a severe disorder of her central nervous system,” The New York Times wrote this week.

“[H]er spinal fluid had tested positive for traces of Ebola.”

As doctors are poignantly learning, saying that a patient is “cured” of the virus doesn’t necessarily mean that it’s completely eradicated from the body.
Ebola survivors like Cafferkey are experiencing lingering symptoms such as vision and hearing loss, seizures, insomnia, and body aches that have persisted for months following infection.
The virus — which is transmitted through infected bodily fluids and can cause severe fever, diarrhea, vomiting, headache, pain, and bruising — kills about half of those who contract it.
Epidemic
As of October 2015, Ebola has killed a staggering 11,312 people. This was following the 2014 epidemic, which quickly spread through West Africa and trickled into parts of the US and Europe.
While those who count themselves among the survivors are especially lucky to be alive, many are still suffering. Doctors are still learning what other nasty health issues can flare up long after defeating the primary, life-threatening infection.
One of the best sources of information we have on these latent symptoms is Dr. Ian Crozier, an American Ebola survivor who contracted the illness while treating patients in Sierra Leone in August 2014. Scottish nurse Pauline Cafferkey.Source: Lisa Ferguson/Scotland on Sunday
At an infectious disease conference in San Diego on October 7, Crozier detailed some of the bizarre and devastating symptoms he’s experienced since his more than 40-day recovery at Emory University Hospital in Atlanta.
The most striking were severe eye issues, which began about 10 weeks after his first symptoms of Ebola, and which nearly caused him to go blind. A report published in The New England Journal of Medicine on May 7, 2015 described the flotilla of symptoms.
When Crozier was released from the hospital 10 weeks after Ebola onset, the virus was not detectable in his blood and urine, but was present in his semen.
He experienced difficulty walking, lower back pain, inflammation of his Achilles tendon, and pins-and-needles sensations in his lower limbs. Crozier also began to feel burning in his eyes, along with the feeling that something was in his eyes and a sensitivity to light. An eye exam revealed scarring on the inside surface of his eye and a small hemorrhage next to one of the scars in his left eye.
About a month later, these symptoms worsened. His doctors took a sample of the fluid that sits between the cornea and lens and — lo and behold — it tested positive for Ebola.
His vision continued to decline in his left eye, and at one point his eye color even turned from blue to bright green.

Ian Crozier's eye turned from blue to green following Ebola disease.Source: CNN
“In addition to the colour change, I lost pressure in my eye, my eye began getting softer and losing its architecture,” Crozier said in a video interview with CNN.

“So by the time I flew back to Phoenix, it was like looking through a block of cheese.”

Eye problems aren’t unusual among Ebola survivors. About 25% of Ebola survivors who have been evaluated by medical doctors have reported changes in vision, according to the Associated Press.
Crozier’s vision has since improved, after what turned out to be cellular debris that was blocking his line of vision detached from his retina. But according to Live Science, it still isn’t back to normal.
Since Crozier was released from the hospital, he’s continued to experience severe back pain, ringing in his ears, hearing loss, and cognitive problems such as impaired short-term memory. He also suffered a seizure while attending a wedding in England this summer, according to Live Science, and has since been put on an antiepileptic drug.
Nina Pham, a Texas nurse who contracted the disease while treating a patient at a Dallas hospital in October 2014, has also had lingering health issues, including hair loss, body aches, nightmares, and insomnia. 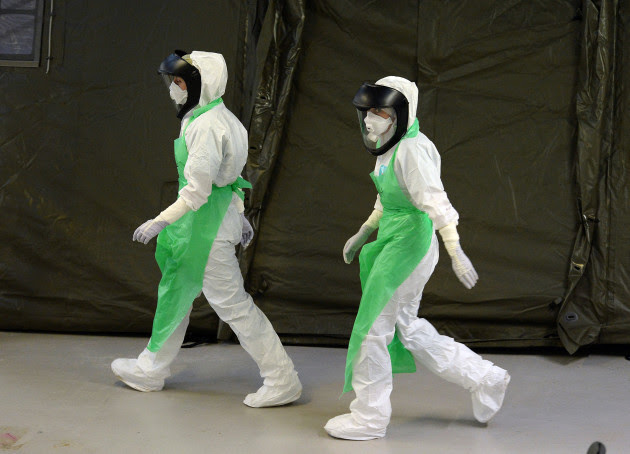 An Ebola medical exercise takes place in the UK.Source: Anna Gowthorpe
Long-term effects
Few people survive Ebola like Crozier, so the disease’s long-term effects aren’t well-studied. But lingering symptoms such as body and joint aches and fatigue are what you’d expect after any serious infection, Jesse Goodman, an infectious-disease expert and a professor of medicine at Georgetown University Medical Center in Washington, D.C., told LiveScience.
Chemicals released by the immune system can make people feel sick, Goodman said, and muscles and tissues could have been injured from the dehydration, malnutrition, and low blood pressure during the disease.
Roughly 13,000 other Ebola survivors are experiencing similar problems as Crozier, Pham, and other survivors. To that end, scientists launched a five-year study in June that will follow 1,500 Ebola survivors and 6,000 of people they were in close contact with.
But not all survivors have had such horrendous lasting effects.
Journalist Ashoka Mukpo was emotionally scarred after contracting Ebola while covering the outbreak in Liberia, but in an interview with CNN he said, “I feel pretty strong physically, psychologically, and spiritually right now”. And doctor Rick Sacra, who also contracted Ebola in Liberia, only experienced blurry vision and a bad cough following his recovery at a hospital in Nebraska.
“There is an emerging problem in Ebola survivors,” Crozier said in the CNN interview.
“It will be a varied spectrum — some will be mild, but there will be patients who develop severe complications and who are going blind. You can imagine an Ebola survivor who’s already been through their own personal hell … and then through a lonelier hell in an ETU [Ebola Treatment Unit],” Crozier continued.

“It’s a story we must pay attention to.”