Court ruling confirms Gardasil vaccine kills people… scientific evidence beyond any doubt… so where is the outcry? 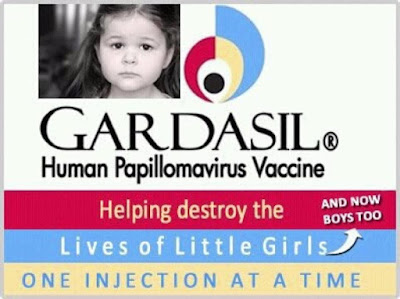 (Natural News) May God bless the Tarsell family, who fought the U.S. government eight long years to validate a medical burden of proof that the Gardasil vaccine killed their daughter. The Tarsell’s 21-year-old daughter Christina Richelle “died from an arrhythmia induced by an autoimmune response” to Gardasil, an HPV vaccine that she received only days before her death.

The final ruling has been confirmed by the Department of Health and Human Services: Merck’s Gardasil vaccine causes autoimmune problems that cause sudden debilitation and/or death. If the young girl had been gunned down by a madman with an AR-15, then there’d be national headlines and a march on Washington. Since this young woman was “shot” to death by a vaccine, the whole story gets swept under the rug.
Never mind that the Gardasil vaccine is responsible for ending the lives of 271 young women to date, according to over 57,520 adverse event reports obtained from the Vaccine Adverse Events Reporting System.

If 271 young people died in a school shooting, the news coverage would be nonstop in support of gun bans. How about a ban on Gardasil – a real modern day assault weapon?
The Tarsell’s case was initially taken up by the Vaccine Court, which is a payout system that was set up to compensate families for vaccine damage. Vaccine makers pay an excise tax to this system for every vaccine they sell. This money (cost of doing business) is used to pay out damages to select families who can medically prove they were damaged by a vaccine. This system protects vaccine makers from being sued in a true court of law, ensuring that vaccines will continue to be manufactured for the “good of all.”
Support our mission and enhance your own self-reliance: The laboratory-verified Organic Emergency Survival Bucket provides certified organic, high-nutrition storable food for emergency preparedness. Completely free of corn syrup, MSG, GMOs and other food toxins. Ultra-clean solution for years of food security. Learn more at the Health Ranger Store.
At first, the Special Master from the Vaccine Court said that Ms. Tarsell did not persuasively establish “a basic proposition of her claim, that Christina did not experience an arrhythmia until after the first dose of the HPV vaccine.” The Special Master declared that “without this foundation, Ms. Tarsell’s claim cannot stand.” The Special Master did not assess the medical records provided by the Tarsell’s. These records proved that Christina’s arrhythmia was not present until after the Gardasil vaccine. The Special Master instead based his decision on the possibility that Christina’s arrhythmia could have been present before it was detected, even though her medical records told otherwise. Even though the arrhythmia was prevalent following Gardasil, the Special Master claimed her arrhythmia was from an “unknown” source.
The Tarsel’s took their case directly to the Department of Health and Human Services and after eight years of fighting, they received a 22-page ruling by Judge Mary Ellen Coster Williams. The ruling declared that the Special Master’s approach for analyzing the case “placed an overly onerous burden of proof.”
Therefore Judge Williams declared:

Petitioner’s motion for review is GRANTED. The Special Master’s decision denying compensation is VACATED, and the case is REMANDED to the Special Master for further proceedings consistent with this decision…

After eight years of fighting for justice, the Tarsell’s finally received this judgment from Special Master Christian J. Morgan:

The Court’s Opinion and Order required additional consideration consistent with the legal principles articulated by the Court for analyzing the evidence in this tragic case about a woman, Christina Tarsell, who died much too young. Under the approach dictated by the Court, Ms. Tarsell is entitled to compensation. The parties should anticipate that a separate order regarding damages will issue shortly. Pursuant to Vaccine Rule 28.1(a), the Clerk’s Office is instructed to notify the Court of this ruling.

Now that a court has confirmed that Gardasil vaccine kills people, where is the national media coverage? Where is the public outcry?
Read Vaccines.news for more coverage of vaccine damage and the insane denial of reality by the vaccine-pushing medical establishment.