The moneyed corporations running the GMO show certainly don’t make it easy. Now that they have won not one, but four different GMO labeling battles, what makes anyone think we can win against Monsanto, Dow, Syngenta, Bayer, Cargill, and the GMA, just to name a few Round-Up-Ready giants?

Though a difficult food war to overcome, we do have the power and collective voice to win
– but we must all know what we’re up against.

“If you are going through hell, keep going.” ~ Winston Churchill
First, we were defeated in Washington and California, then came Oregon and Colorado. Not to mention Vermont and Maui County are still up to their necks in Monsanto fertilizer, trying to win their right to democratically voted-upon GMO labeling initiatives in drawn out court battles.
So what, besides ridiculous (and often illegal) campaign spending, still stands between us and knowing what is in our food?
Sure, Prop 37 in California was defeated by a slim margin using agro-chemical money to the tune of $47 million, but there must be something more. The proposition lost by less than 2%.
Indeed, GMO labeling supporters were outspent by 5 to 1, but what else allowed biotech to win in this and other labeling campaigns?
Without ignoring claims of vote-fixing and the illegal campaign contributions, biotech has an advantage in other areas we should all take account of.
Here are some more reasons we have lost the GMO-labeling (let alone simple banning) fight:

1. Millions of Dollars in Propaganda


Click here for a better view of the FULL version. 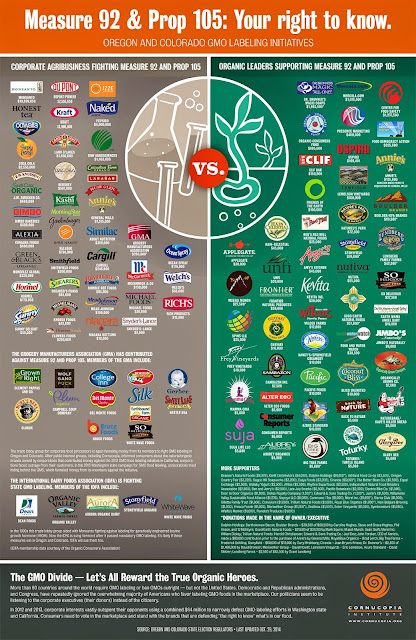 Click here for a better view of the FULL version.
For people who pay attention to the GMO issue, they are torn between claims by scientists showing the dangers, and claims made by industry-supported ‘scientific’ studies which show GMOs cause little to no harm. The problem is that most of the American population doesn’t really know what GMOs are, so when biotech spends millions of dollars tapping the market, it generally becomes an overriding success. Just try telling a less uninformed person that the CDC is corrupt – their bias is so strong that they will label you a conspiracy theorist, even though CDC whistleblowers themselves have come out pointing to layers of lies and payouts within the agency.
Even those who are wary of GMOs don’t really understand why they are dangerous, and therefore chalk it up as an issue that simply doesn’t warrant concern. Even after early biotech creations like ‘golden rice’ were debunked, people still believe it can ‘feed the world.’
But we don’t need GMOs to feed the world.

2. Most People Just Don’t Know
Not everyone has seen the documentary GMO OMG or Bitter Seeds. When I lived at an apartment complex a few years ago and talked to college-educated, working-class folks in their late 20s and early 30s about GMOs, more than half of them had never heard of them, and those who did thought it was a ‘conspiracy’ theory. The fact is that even though millions don’t want to eat GMO foods, many people don’t even know what a genetically modified food is.


3. Anti-GMO Whistle Blowers are Subject to Character Attacks and Name-Calling

This article on Discover Magazine’s website completely tears Mike Adams of Natural News a new one. The title is: “GMO Worry Warts: This is Your Brain on Ignorance and Ideology.” While I’m not defending everything in Adams’ article, this Discovery piece is just one of thousands that are circulated to keep people afraid of even asking the question – are GMOs really safe?
A 14-Year veteran Reuters reporter was targeted by Monsanto in the same way. As long as people who bring GMO questions to the fore of conversation are demonized and ridiculed, the layperson won’t feel confident to ask questions, or demand labeling. Even though thousands of scientists, celebrities, and others have come forward on GMOs, the smear campaigns continue.
Remember, entire presidential elections have been won and lost using this Bernaisian tactic.

4. Legal Shenanigans
If there were truly a democratic process concerning GMO labeling, then why would anti-labeling advocates sue to try to get labeling off a bill? Wouldn’t the people’s decision be ample to tell food manufacturer’s what they want? While strange language has been used repeatedly to claim GMOs are safe, Citizens Against the Maui County Farming Ban filed suit against the county clerk and state chief elections officer to remove a GMO initiative from the ballot in Maui County.
Their claim was that the wording of the initiative is confusing, misleading, and is geared to deceive voters. Hmm, sounds like a tactic of biotech. Michael Hansen, Ph.D., Senior Scientist with the Consumers Union who has presented clear claims against biotech has been accused of the same thing. It reminds me of a playground bully tactic – utilizing the very same logical argument and then spinning it to use it in a ‘debate’ against the one who originally presented the idea.

5. Straight up Lies
Monsanto has stated, “The safety and benefits of these [GMO] ingredients are well established.”
Truthfully, the safety and benefits of these ingredients are NOT well established. No long-term study exists on either the safety or benefits of GMOs, so there is no basis for Monsanto to make this claim. The U.S. Food and Drug Administration does not even require safety studies of genetically engineered foods.
However, some independent studies raise questions about links to allergies and other potential health risks as severe as cancer, kidney failure, altered DNA, antibiotic resistance, and more. Monsanto also spouts claims by the American Medical Association, that GMOs are safe.
If you believe everything this corrupt establishment says, I’ve got a melting glacier to sell you. The AMA has lied about medical malpractice, carcinogenic cancer drugs, and more.

6. Overwhelmed
After the labeling initiative failed in California in 2012, there was some suggestion that voters just had too many items on their ballots that presidential election year to parse the competing GMO claims.

7. Confusing Ballots
It has also been stated that the Yes to Labeling vote was confusing on many ballots, as people could not determine if they were voting yes or no based on the verbiage on the ballot.
8. Money. Money. Money.

In a world that worships the almighty petro-dollar, I can’t go without mentioning money. I know I proposed a look at reasons biotech is winning without looking at the money trail, but the fact remains that money buys votes.

While raising more money for labeling campaigns will help, there are numerous other fronts that can be addressed when fighting the biotech bullies to get our food labeled, in the least
– though an outright ban would be better.
As we continue to jump through hoops to get GMOs out of our food supply, we can look for new ways to reverse the labeling tide.

Ultimately, I’m planting my own non-GMO garden, but until these Franken foods are eliminated completely, even that isn’t entirely safe due to cross-pollination.

24 Haunting Photos Of The War Crime The U.S. Got Away With 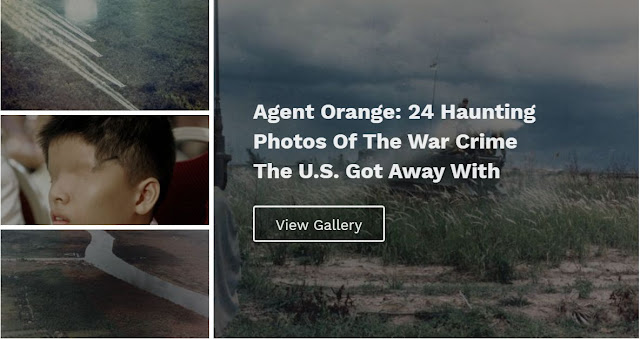 For ten years, the U.S. military terrorized a country with Agent Orange, a chemical weapon whose effects are still being felt