From the beginning, one of the main financiers of the “Brussels EU” was the West German Government. On April 24, 1964, the key architects of the “Brussels EU” – all of them active members of the IG Farben/Nazi coalition during WWII – met at the “Brussels EU” headquarters to stake their claims on the future of the European continent. Apparently they were so sure about their success to take control over Europe in their 3rd attempt, via the “Brussels EU”, that they posed proudly for this picture. The men shown in this picture are:
The above picture is provided by the European Commission. It can be used anywhere free of charge for educational purposes. Unfortunately, the information provided on the EU Commission website about the participants of this meeting leaves out key aspects about their background.
Following is a more complete description of the men in this picture, who met in April 1964 at the EU Commission in Brussels. It reads like a “who is who” of characters from the Nazi/IG Farben-coalition:
Only 19 years after the IG Farben/Nazi-coalition had caused the death of 60 million people and destroyed half of Europe during WWII, they were already at it again. Their third attempt to conquer Europe would not take place in military uniforms but in the grey suits of corporate and political stakeholders of the cartel.
Everyone who looks at the background of Hallstein and the cast of characters posing here as key architects of the “Brussels EU” asks:


Hitler family and Angela Merkel, the “lost” daughter of Hitler 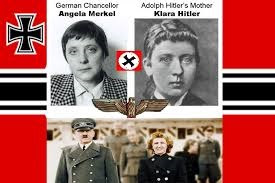 Carl Clauberg a German doctor from the Nazistic Germany, the “angel of death” as he was known, was arrested and sentenced for his crimes against the humanity, after the end of the Second World War However seven years later he was released because he was recognized as the “father” of the artificial insemination….
https://graviolateam.blogspot.com/p/angela-merkel-lost-daughter-of-hitler.html