(Natural News) A bombshell new scientific study published in the Proceedings of the National Academy of Sciences (PNAS) finds that people who receive flu shots emit 630% more flu virus particles into the air,compared to non-vaccinated individuals. In effect, this finding documents evidence that flu vaccines spread the flu, and that so-called “herd immunity” is a medical hoax because “the herd” is actually transformed into carriers and spreaders of influenza.

The bombshell finding is documented in a study entitled Infectious virus in exhaled breath of symptomatic seasonal influenza cases from a college community. The study authors are Jing Yan, Michael Grantham, Jovan Pantelic, P. Jacob Bueno de Mesquita, Barbara Albert, Fengjie Liu, Sheryl Ehrman, Donald K. Milton and EMIT Consortium.
Details of this bombshell study have been revealed by Sayer Ji at Green Med Info, a site that’s rapidly becoming one of the world’s most authoritative sources on intelligent analysis of real science. Green Med Info has published 500 studies that document the adverse effects (and injury) of vaccines. Find that extensive list at this link.

The study, which examined 355 volunteers who were sick with flu-like symptoms, found that people who previously received flu shots emitted sharply higher quantities of flu virus particles that can infect other people.

From the study:
Fine-aerosol viral RNA was also positively associated with having influenza vaccination for both the current and prior season… We provide overwhelming evidence that humans generate infectious aerosols and quantitative data to improve mathematical models of transmission and public health interventions… Our observation of an association between repeated vaccination and increased viral aerosol generation demonstrated the power of our method, but needs confirmation.
Mother Nature's micronutrient secret: Organic Broccoli Sprout Capsules now available, delivering 280mg of high-density nutrition, including the extraordinary "sulforaphane" and "glucosinolate" nutrients found only in cruciferous healing foods. Every lot laboratory tested. See availability here.
Shockingly, people who received prior flu shot vaccinations were found to emit 6.3 times (or 630%) the number of flu virus particles emitted by non-vaccinated individuals.
This means — prepare yourself for this realization — that the most responsible way to avoid infecting other people is to AVOID being vaccinated with flu shots.
People are receive flu shots, in other words, are irresponsible spreaders of the flu. They’re the ones making other people sick, just as we’ve observed for years.

In other words — just to repeat this — people who avoided vaccines spread less than 1/6th the number of flu virus particles compared to those who received flu shots. Thus, non-vaccinated people are the ones who don’t spread the flu. The “anti-vaxxers,” it turns out, are the ones protecting the children after all.

Yet to hear vaccine propagandists like Jimmy Kimmel say it, people who don’t get vaccines are very nearly “child murderers.” That’s the false narrative of the corrupt, pseudoscience vaccine industry.


Scientific evidence that the flu vaccine SPREADS the flu

These results reveal the shocking truth about flu vaccines that few have dared utter, for fear of being branded “anti-vaxxers:” Flu vaccines spread the flu. (Is it by design? We’ll cover that in a later article…)
“Clearly, if this finding is accurate and reproducible, flu vaccination may actually make you more likely to infect others,” explains Sayer Ji in his Green Med Info article. “We have been reporting on the conspicuous lack of evidence for flu vaccine effectiveness (and safety) for over a decade, based largely on the underreported failure of the Cochrane Database Review to show them effective (and safe), despite hundreds of industry-funded studies that have attempted to do so.
Learn more: http://www.greenmedinfo.com/blog/shocking-lack-evidence-supporting-flu-vacc…”

Far from the current tactic of the vaccine industry blaming non-vaccinated people for spreading disease, this study reveals why it’s actually vaccinated children and adults who keep spreading infectious disease. They are the ones “shedding” the flu virus particles that infect others! (This also explains why flu outbreaks frequently occur among children who were already vaccinated with flu shots.) 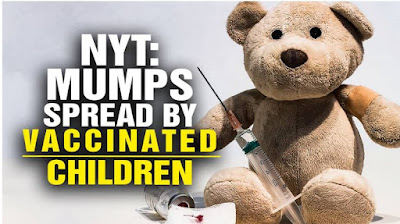 “Herd immunity” hoax collapses in the face of real science

Furthermore, the so-called “herd immunity” effect that’s often touted to push more vaccines on everyone has been exposed as a complete hoax by this study. If vaccinated people are the very ones spreading flu virus particles into the air, then the herd is spreading the flu, not preventing it.
“Herd immunity,” it turns out, actually becomes “herd multiplication” of the viral strain, since the herd is “weaponized” into flu virus spreaders. This finally explains why so many children who get infected with the flu (or measles, mumps and other infectious diseases) tend to be the very same children who were vaccinated against those diseases. The vaccines transform children into carriers of the disease, infecting others and contributing to the epidemic. This, in turn, results in panic among the news media, which urges everyone to rush out and get vaccinated as quickly as possible. Within a few days, a second wave of infectious begins to spread, caused by the vaccine itself.

The media’s role is crucial in all this, as it’s the job of the media to create fear and panic among parents, then urge them to have their children vaccinated. This perpetuates the spread of the disease and sets up the entire scam for another round of outbreaks, panic and vaccine sales. 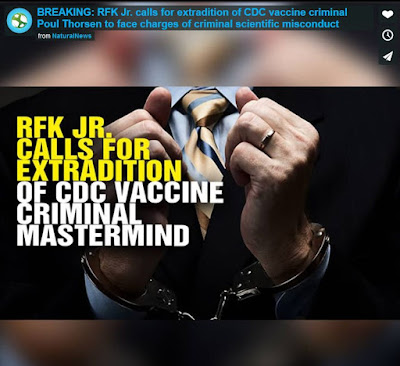 The product markets itself, in other words. While crack cocaine and heroin rely on addiction for self-perpetuating marketing, vaccines actually cause the very conditions they claim to prevent. Each outbreak then becomes another marketing push, and the cycle repeats in waves (as children are injured and killed by vaccines all across America).
To keep the medical scam going, any person who dares cite legitimate scientific findings that question the vaccine dogma of the modern medical cartel is immediately branded an “anti-vaxxer” and marginalized by the media.

Thus, vaccines are never subjected to scientific scrutiny, since all science that observes effects which counter the vaccine dogma is sidelined, attacked or ignored. Only findings that support the pseudoscience vaccine narrative are “accepted” by the medical establishment, thus ensuring that no challenge to vaccine safety or effectiveness can ever see the light of day.

This is how the vaccine industry continues to carry out what has often been called a “medical holocaust” while stifling skepticism, science and critical thinking that dares point out the risks associated with widespread immunization policies. 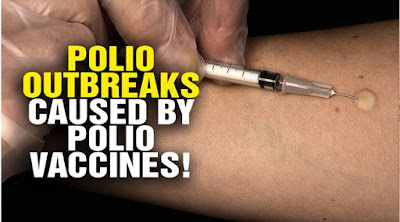 Save lives by staying informed about the true risks associated with vaccines. Read Vaccines.news and Medicine.news for daily updates rooted in evidence-based science and medicine.

About the author: Mike Adams (aka the “Health Ranger“) is a best selling author (#1 best selling science book on Amazon.com called “Food Forensics“), an environmental scientist, a patent holder for a cesium radioactive isotope elimination invention, a multiple award winner for outstanding journalism, a science news publisher and influential commentator on topics ranging from science and medicine to culture and politics. Follow his videos, podcasts, websites and science projects at the links below.
Mike Adams serves as the founding editor of NaturalNews.com and the lab science director of an internationally accredited (ISO 17025) analytical laboratory known as CWC Labs. There, he was awarded a Certificate of Excellence for achieving extremely high accuracy in the analysis of toxic elements in unknown water samples using ICP-MS instrumentation. Adams is also highly proficient in running liquid chromatography, ion chromatography and mass spectrometry time-of-flight analytical instrumentation. He has also achieved numerous laboratory breakthroughs in the programming of automated liquid handling robots for sample preparation and external standards prep.
The U.S. patent office has awarded Mike Adams patent NO. US 9526751 B2 for the invention of “Cesium Eliminator,” a lifesaving invention that removes up to 95% of radioactive cesium from the human digestive tract. Adams has pledged to donate full patent licensing rights to any state or national government that needs to manufacture the product to save human lives in the aftermath of a nuclear accident, disaster, act of war or act of terrorism. He has also stockpiled 10,000 kg of raw material to manufacture Cesium Eliminator in a Texas warehouse, and plans to donate the finished product to help save lives in Texas when the next nuclear event occurs. No independent scientist in the world has done more research on the removal of radioactive elements from the human digestive tract.
Adams is a person of color whose ancestors include Africans and American Indians. He is of Native American heritage, which he credits as inspiring his “Health Ranger” passion for protecting life and nature against the destruction caused by chemicals, heavy metals and other forms of pollution.
Adams is the founder and publisher of the open source science journal Natural Science Journal, the author of numerous peer-reviewed science papers published by the journal, and the author of the world’s first book that published ICP-MS heavy metals analysis results for foods, dietary supplements, pet food, spices and fast food. The book is entitled Food Forensics and is published by BenBella Books.
In his laboratory research, Adams has made numerous food safety breakthroughs such as revealing rice protein products imported from Asia to be contaminated with toxic heavy metals like lead, cadmium and tungsten. Adams was the first food science researcher to document high levels of tungsten in superfoods. He also discovered over 11 ppm lead in imported mangosteen powder, and led an industry-wide voluntary agreement to limit heavy metals in rice protein products.
In addition to his lab work, Adams is also the (non-paid) executive director of the non-profit Consumer Wellness Center (CWC), an organization that redirects 100% of its donations receipts to grant programs that teach children and women how to grow their own food or vastly improve their nutrition. Through the non-profit CWC, Adams also launched Nutrition Rescue, a program that donates essential vitamins to people in need. Click here to see some of the CWC success stories.
With a background in science and software technology, Adams is the original founder of the email newsletter technology company known as Arial Software. Using his technical experience combined with his love for natural health, Adams developed and deployed the content management system currently driving NaturalNews.com. He also engineered the high-level statistical algorithms that power SCIENCE.naturalnews.com, a massive research resource featuring over 10 million scientific studies.
Adams is well known for his incredibly popular consumer activism video blowing the lid on fake blueberries used throughout the food supply. He has also exposed “strange fibers” found in Chicken McNuggets, fake academic credentials of so-called health “gurus,” dangerous “detox” products imported as battery acid and sold for oral consumption, fake acai berry scams, the California raw milk raids, the vaccine research fraud revealed by industry whistleblowers and many other topics.
Adams has also helped defend the rights of home gardeners and protect the medical freedom rights of parents. Adams is widely recognized to have made a remarkable global impact on issues like GMOs, vaccines, nutrition therapies, human consciousness.
In addition to his activism, Adams is an accomplished musician who has released over fifteen popular songscovering a variety of activism topics.
Click here to read a more detailed bio on Mike Adams, the Health Ranger, at HealthRanger.com.
Find more science, news, commentary and inventions from the Health Ranger at:
Diaspora: (uncensored social network)
Share.NaturalNews.com
GAB.ai:GAB.ai/healthranger
Vimeo:Vimeo.com/healthranger
Podcasts:
HealthRangerReport.com
Online store:HealthRangerStore.com
#1 Bestselling Science Book Food Forensics:FoodForensics.com
Facebook:
Facebook.com/HealthRanger
Twitter:
Twitter.com/HealthRanger
iTunes:
itunes.apple.com/us/podcast/the-health-ranger-report/id1063165791
Youtube:
YouTube.com/TheHealthRanger
G+
plus.google.com/u/0/b/106753783877820567659/
SoundCloud:
Soundcloud.com/healthranger
Health Ranger’s science lab
CWClabs.com
Health Ranger bio
HealthRanger.com
TruthWiki.org
Search engine:
GoodGopher.com