Once we understand that the plumes we see coming out of jets are not condensation trails, we must ask the question:

"What is coming out of jet engines today?"

Link to this page using this short URL:http://gsw.bz/injection

Airflow Through A High-Bypass Turbofan Engine

Below is a popular animation showing the operation of a high-bypass turbofan engine.

The air passing through the outer shroud is called "bypass air" (the purple arrows below). This air is simply blown though the engine duct without being combusted. Much like historic propeller planes, air is simply pushed out the back of the engine by the "fan", which is a large circular series of blades that spin at the front of the engine. This bypass air provides about 85% of total thrust.

The air passing through the inner core (the red arrows below) feeds the turbine engine and becomes about 15% of the total thrust. This flow of air becomes the exhaust from the combustion of jet fuel (essentially kerosene) within the turbine.

Below is a cutaway of the high-bypass turbofan engine which powers Boeing's new 787 Dreamliner commercial aircraft: A Rolls Royce Trent 1000. Note the tremendous size of the fan in the front of the engine. 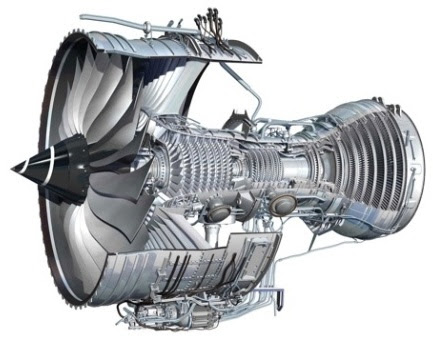 When viewing the two separate air streams from the back of the engine, we see a doughnut-shaped outer ring which emits bypass-air (light blue) and an inner core of air which is the exhaust of the turbine engine (red). 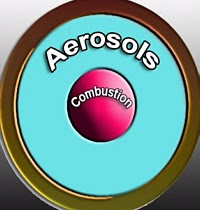 Numerous investigators have discovered something extremely significant. The massive plumes emitted from high-bypass turbofans are often emitted only from the bypass-air stream, not from the turbine exhaust. Telescopic photography (below) shows the difference in appearance between the bypass air and the clear exhaust stream. 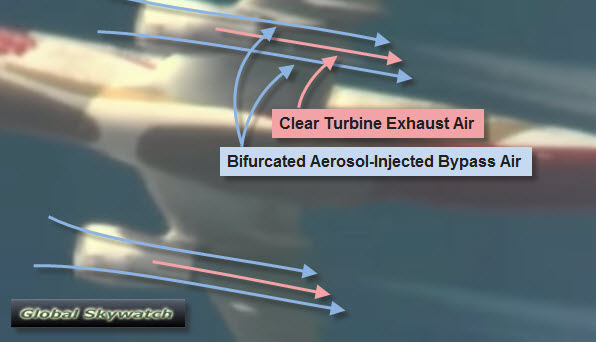 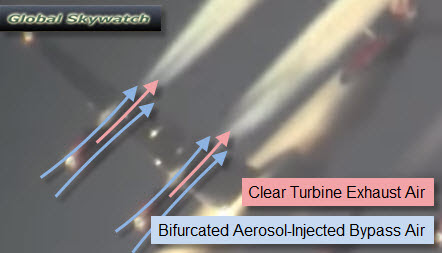 These observations have profound implications.

Since the outer ring of bypass air which is not combusted is filled with particulates dense enough to see with the naked eye, we have to ask ourselves:

How can uncombusted air passing though a fan form massive plumes of condensation?

The only reasonable explanation is that chemical aerosols are being injected into the bypass air stream within the engine, and of course, we have the lab tests on the ground to show the resulting rainwater contamination.

In this video, carefully view how the outer ring of high-bypass air contains visible aerosols while the combusted inner core of the air is clear. This is definitive evidence that these plumes are not condensation trails, and this leads us to the only logical conclusion we can come to based on these observations:

Chemical aerosols are being injected into the outer high-bypass air of the engine. 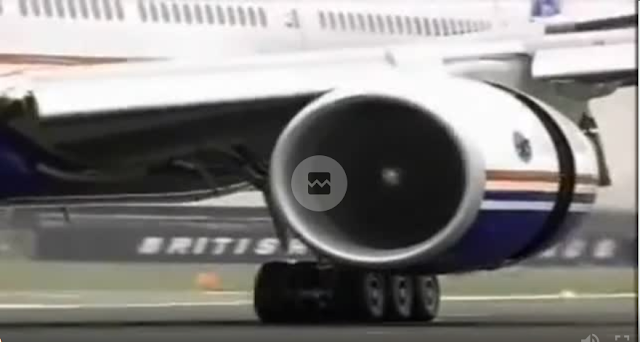 
What About Non Bifurcated Plumes? Are They Injected Aerosols?

Not all of these massive plumes we see in the sky are bifurcated (split). How can we know whether or not these plumes are contrails?

When analyzing non-bifurcated plumes, whether the plumes are long or short, all of the previously-covered points still apply, as do other important points of evidence:

(1) High-bypass turbofans don't emit enough water to create contrails or ice crystals (unless it's a rare water-injection engine, such as the Spey 512, of which only about 50 are still in service in the U.K.).

(3) Conditions for engine-contrail formation only occur at altitudes too high to be seen from the ground, furthermore, this point only applies to jet engines because high-bypass turbofans don't emit sufficient water to produce plumes.

(4) Historical observations show that high-bypass jet plumes are virtually non-existent until they suddenly started covering the skies literally overnight between 1995 and 2000, depending on location.

(6) Environmentally-sensitive people in numerous countries detect air contamination and suffer symptoms that correlate with observed plume events. This symptoms correlate with symptoms of the metals being found in surface water tests.

These points and others provide an overwhelming body of evidence that metals and other contaminants are being intentionally released during observed plume events. 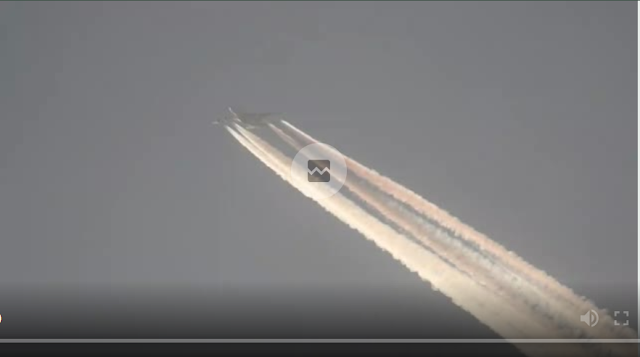 In this video the plumes are so well divided that it's possible to estimate the position of the chemical injectors in the bypass-air. 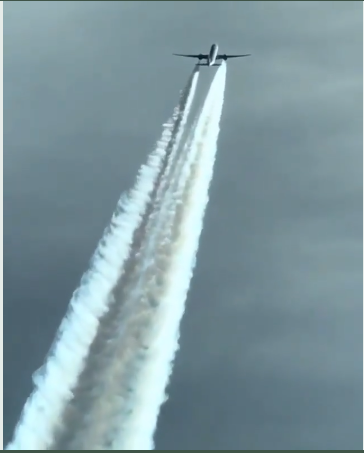 
These images show clear indications that an aerosol is being injected into the bypass air of these engines. These plumes are clearly divided as they exit the engines. 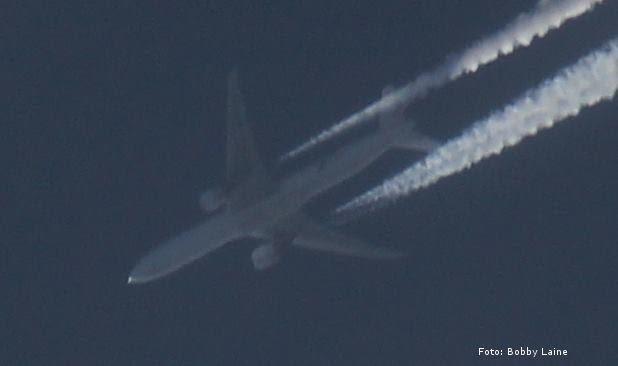 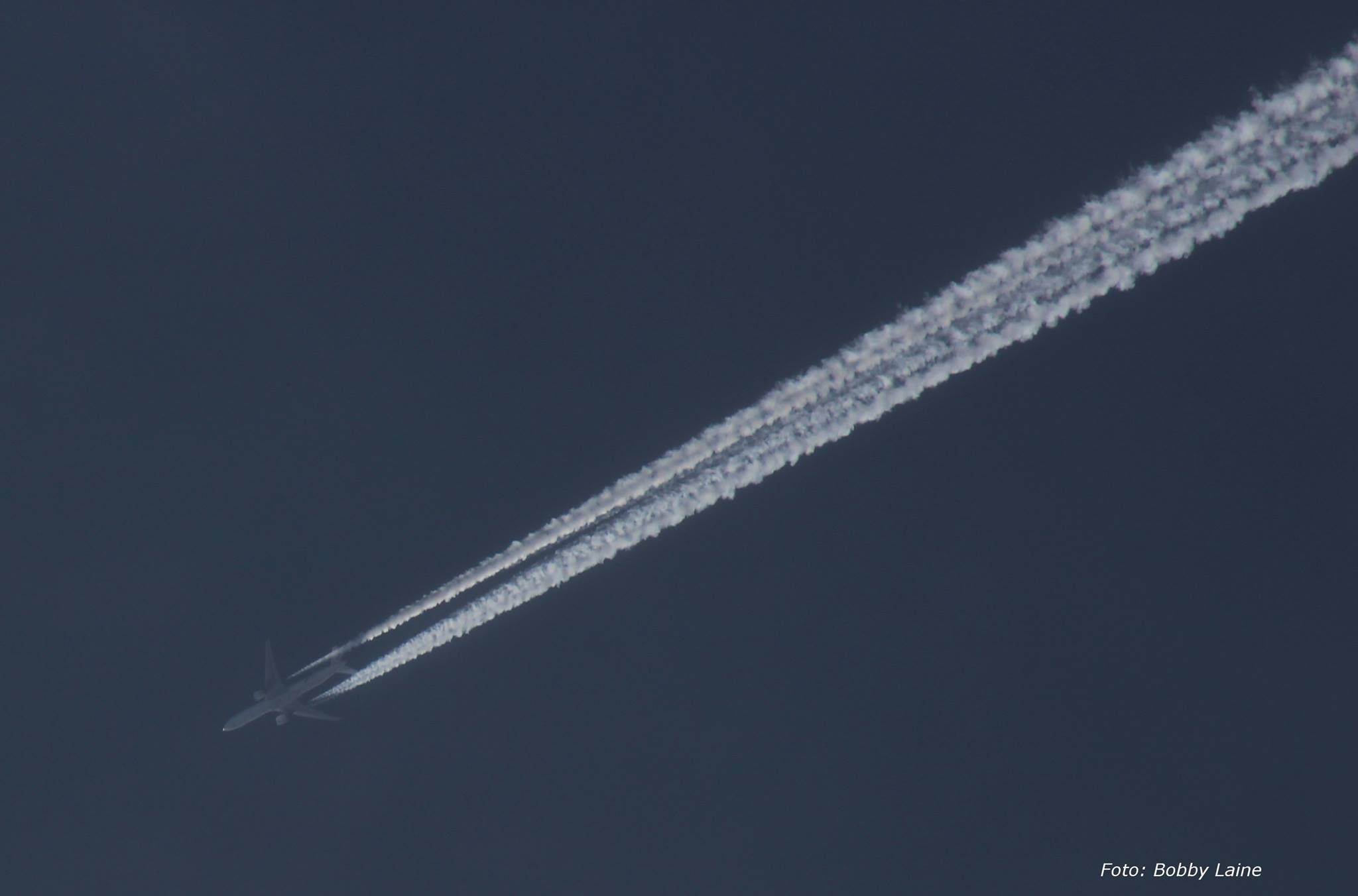 This photo points out the clear demarcation that remains from bypass air injectors. 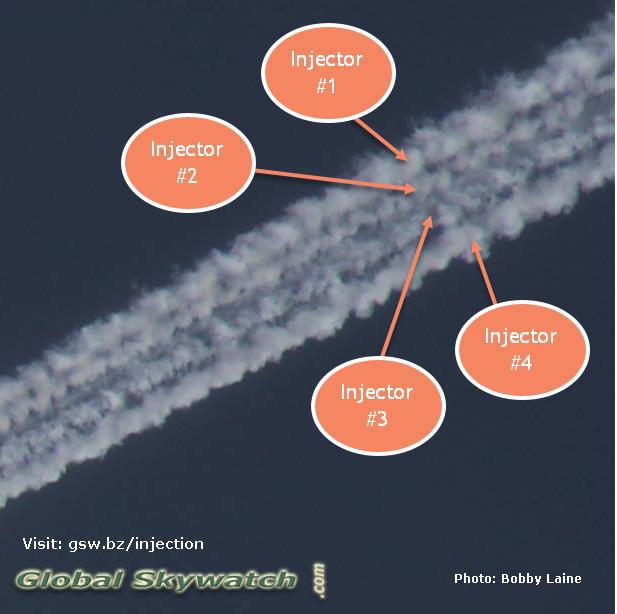 High-Bypass Turbofans DO NOT Produce Contrails. So What Are Those Lines in the Sky?

Who Is Ken Caldeira

Contrails DO NOT EXIST According To Older Aviation Textbooks

Chemtrails in Animated Movies: "Over the Hedge"

Disinformation At An All-Time High

The Methods Used To Keep You In The Dark