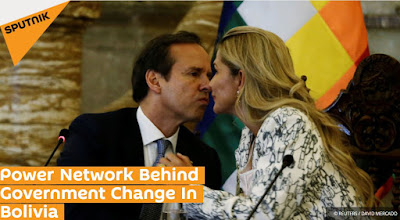 
An international team of researchers from Latin America and Europe have constructed a map that reflects how a network of US government agencies, private corporations, foundations, non-governmental organisations and the media were ‘essential’ in ousting Bolivia’s President Evo Morales.
One of the creators of the map is Silvina Romano - she is a graduate in history and communications theory and a candidate in political science. She has dedicated her last years of study to US relations with Latin America "with special emphasis on issues of psychological warfare".


"At first, we worked on the relationship between the US and Latin America, but a year ago the topic was rephrased to include other powers, such as Russia and China, that dispute the interests of the United States", Romano explained.

After the regime change in Bolivia, due to which Morales and several members of his government were forced to flee to Mexico, Romano’s team of experts presented their geopolitical analysis of this event in the form of a power network that was published by the Latin American Strategic Centre for Geopolitics (Centro Estratégico Latinoamericano de Geopolítica (CELAG)) in the report "The US and the coup architecture in Bolivia".
ANÁLISIS GEOPOLÍTICO 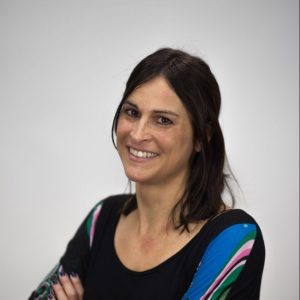 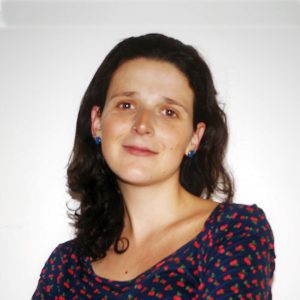 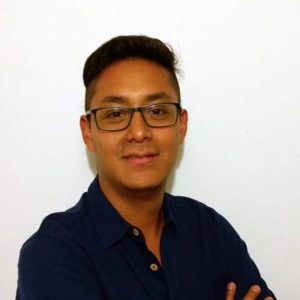 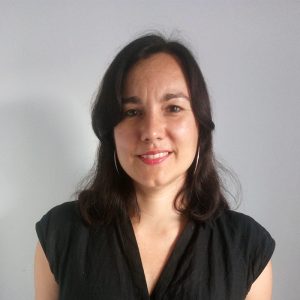 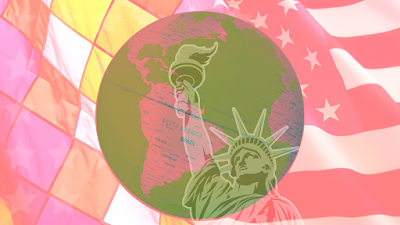 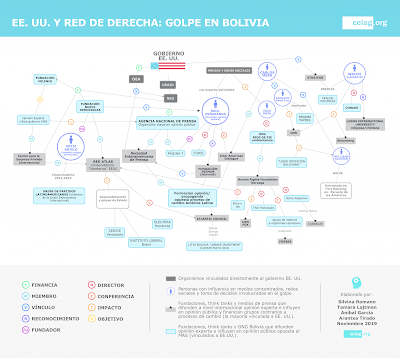 Silvina Romano has offered some guidelines for reading that map.

What is a Power Network?

"There is always talking about imperialism and world domination, but people do not believe it because they say there is no proof of it. The network or map of power and interaction of different forces is a way to materialise and explain how such a system works", Romano explained.
She noted that in the case of Bolivia, the link between the US government and transnational corporations that share employees and the political institutionalisation of market technologies, such as lobbying, has been confirmed. She added to her analysis a mechanism, described in the 1980s by communication theorists, that includes the media.

"The concept of 'Manufacturing Consent' comes from the work of Edward Herman and Noam Chomsky, called 'The Guardians of Freedom', 1988. The idea about the network of different forces was contributed by Armand Mattelart with his studies on the political economy of critical communication, but since they are not postmodern authors, they have long been forgotten", Romero said, noting the relevance of this theory for understanding contemporary reality in Latin America. 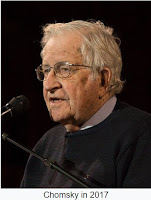 Avram Noam Chomsky[a] (born December 7, 1928) is an
American linguist, philosopher, cognitive scientist, historian,[b][c] social critic, and political activist. Sometimes called "the father of modern linguistics",[d] Chomsky is also a major figure in analytic philosophy and one of the founders of the field of cognitive science. He holds a joint appointment as Institute Professor Emeritus at the Massachusetts Institute of Technology (MIT) and Laureate Professor at the University of Arizona, and is the author of more than 100 books on topics such as linguistics, war, politics, and mass media. Ideologically, he aligns with anarcho-syndicalism and libertarian socialism.
Born to Jewish immigrants in Philadelphia, Chomsky developed an early interest in anarchism from alternative bookstores in New York City. He studied at the University of Pennsylvania. During his postgraduate work in the Harvard Society of Fellows, Chomsky developed the theory of transformational grammar for which he earned his doctorate in 1955.  https://en.wikipedia.org/wiki/Noam_Chomsky

"This power network, woven for a coup in Bolivia, shows the link between local, regional, transnational institutions and personal trajectories. This sociological work helps to understand the minimum percentage, a small part of how these institutions associated with the right-wing parties operate at the local and transnational level when they disagree with the political and economic course of government", the co-author commented.

A Coup Story: Bolivian Case and its Main Actors

Romano specialises in this type of coups d'état. In history, the first in this series was the coup that ousted Jacobo Arbenz from the Guatemalan presidency in 1954.
The map was charted following funding schemes from two US government agencies, namely the US Agency for International Development (USAID), which, in turn, is funded by the National Endowment for Democracy (NED). It is a body "linked with the financing of counterinsurgency forces since its establishment in the 1980s", which now appears behind key agencies in promoting the coup against Evo Morales, according to the study.

"The NED has contributed not so much with money as it has approved certain trends and an international view of the situation," Romano said. These are foundations and NGOs, as well as links with American think tanks, which over the past two or three years have formed an "expert opinion" on Evo Morales, saying that, although the Bolivian economy was doing well, the country had a problem with democracy.

Thus, American think tanks have identified the following problem: "The Bolivian democracy is authoritarian, it does not meet the standards, and the 2019 elections will likely be a scenario of destabilisation and violence if there is no second round of elections". It should be recalled that the conflict in Bolivia began after the second round of presidential elections was declared unnecessary. In other words, they foresaw the scenario that had materialised. They have foreseen or arranged it, Romano thinks.
According to the researchers, the NED directly finances the National Press Association of Bolivia (ANP) and The New Democracy Foundation, created by Santa Cruz Department Senator Oscar Ortiz Antelo, an opponent of MAS (Evo Morales’ Movement for Socialism party).
At the same time, The New Democracy Foundation is a member of the Atlas Network, an organisation created in the 1980s by American conservatives to "promote free markets and liberal values", in their own words.
The Atlas Network is linked to other recent destabilising processes in Latin America through Students for Liberty in Brazil and Eleutera Foundation in Honduras. All these organisations never claim to have the goal of overthrowing the government; they say they are "teaching young leaders about democracy and human rights".
The third element of this game is the media, which chooses the news-worthy subjects for newsmakers that replicate that discourse.

"A key player in Bolivia is Raúl Peñaranda, who was involved in the case of Gabriela Zapata, who claimed to have a son by Evo Morales. This affected the results of the referendum because it called into question Evo’s moral qualities, and they knew that this would be the case", Romano said. 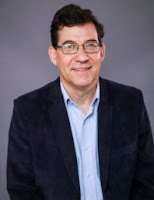 The researcher explained that Peñaranda founded the Fides News Agency, linked to the Church, and gave a speech at the Inter-American Dialogue, one of the most important think tanks for Latin America, led by Michael Shifter, a member of the National Endowment for Democracy since its establishment.

Raúl Peñaranda Undurraga (born 1966) is a Bolivian journalist and political analyst. In 2015 Peñaranda obtained the Maria Moors Cabot for outstanding reporting in Latin America prize, granted by Columbia University. The jury said that he “is one of the most accomplished journalists in Bolivia today” and that “his strong stance against abuse of power and media concentration by the Morales regime, particularly in his latest book “Control Remoto,” earned him relentless persecution by the government, which called him a traitor and a spy.[1]


"That is, they are people with life trajectory between the government and the private sector, which makes them share certain interests and ways of doing business", she explained.

Of the NGOs funded or managed under this foreign network, Rios de Pie or Standing Rivers, led by Jhanisse Vaca Daza – the only one organisation that gained publicity by announcing that Evo Morales was responsible for not having accepted foreign aid in the fires in the Amazon forests.
"Standing Rivers is a non-governmental organisation linked to the Human Rights House Foundation (HRHF), which is an extreme right-wing organisation that runs Islamophobic programmes but has a strong influence in major media such as CNN, Forbes or Fox", Romano said.
"Moreover, a few days ago, Jhanisse Vaca Daza publicly spoke at the National University of Mexico to condemn Evo Morales", she added.
Romano is concerned that these NCOs and trusts that have been previously linked to USAID and NED, "later proved to be spaces for growing government opposition".

"All over the world, this is considered interference in the country's internal affairs and should be punishable by law. You can't just travel around the world and protest against the governments because you want to. But that's exactly what is happening all the time", she concluded.

The rich oligarch leader of Bolivia's right-wing coup, Luis Fernando Camacho, was the leader of an explicitly fascist paramilitary group.

Here are some clips from a promotional historical documentary it published: https://t.co/gFMyfjsi2p pic.twitter.com/XXNQfhD7ii
— The Grayzone (@GrayzoneProject) November 12, 2019

The views and opinions expressed in the article do not necessarily reflect those of Sputnik.
__
https://sputniknews.com/analysis/201912071077505343-power-network-behind-government-change-in-bolivia/

From Wikipedia, the free encyclopedia
Jump to navigationJump to search

For other uses, see Manufacturing Consent (disambiguation).
Manufacturing Consent: The Political Economy of the Mass Media is a 1988 book by Edward S. Herman and Noam Chomsky, in which the authors propose that the mass communication media of the U.S. "are effective and powerful ideological institutions that carry out a system-supportive propaganda function, by reliance on market forces, internalized assumptions, and self-censorship, and without overt coercion", by means of the propaganda model of communication.[1] The title derives from the phrase "the manufacture of consent," employed in the book Public Opinion (1922), by Walter Lippmann (1889–1974).[2] The consent referred to is consent of the governed.
The book was revised 20 years after its first publication to take account of developments such as the fall of the Soviet Union. There has been debate about how the Internet has changed the public's access to information since 1988.

Chomsky credits the origin of the book to the impetus of Alex Carey, the Australian social psychologist, to whom Herman and he dedicated the book.[3]