Julkaistu 14.2.2017
The entire Pacific Coast of the United States, like California, Oregon, Washington (state), Canada, and Mexico, has been officially reported to be contaminated with radioactive particles from the Japanese Fukushima nuclear power plant, which is killing Ocean life in droves. And finally, it's being officially acknowledged that this is really happening. This is a stark reminder that the effects from Fukushima's radiation continually gushing into the ocean, for 6-years now, at 300 to 400 tons of toxic, radioactive water per day, has not been abated. The nuclear site continues to gush highly toxic radioactive material to this day... Nothing has stopped. This terrible, avoidable problem, has only become much, much worse!

2.9.2013
Steven Starr is the Director of the Clinical Laboratory Science Program at the University of Missouri and is an Associate member of the Nuclear Age Peace Foundation and has been published by the Bulletin of the Atomic Scientists. His writings appear on the websites of PSR, the Nuclear Age Peace Foundation, the Moscow Institute of Physics and Technology Center for Arms Control, Energy and Environmental Studies, Scientists for Global Responsibility, and the International Network of Scientists Against Proliferation. Since 2007, he has worked with the governments of Switzerland, Chile, and New Zealand, in support of their efforts at the United Nations to eliminate thousands of high-alert, launch-ready nuclear weapons.

Mr. Starr is also an expert on the environmental consequences of nuclear war, and in 2011, he made an address to the U.N. General Assembly describing the dangers that nuclear weapons and nuclear war poses to all nations and peoples. He has made presentations to Ministry Officials, Parliamentarians, Universities, citizens and students from around the world, and specializes in making technical scientific information understandable to all audiences.

FAIR USE NOTICE: Any copyrighted (©) material is made available to advance understanding of ecological, political, human rights, economic, democracy, scientific, moral, ethical, and social justice issues, which constitutes a 'fair use' of any such copyrighted material as provided for in section 107 of the US Copyright Law.

7.5.2015
www.undergroundworldnews.com
Apr 13, 2015 (emphasis added):
CSU partners with Fukushima University to study radiation effects…
Many CSU faculty and researchers are contributing to radiation research in Japan… including Thomas Johnson… professor of health physics, who is testing trace radiation samples in seal populations in the northern Pacific Ocean, where radiation from the Fukushima disaster was released.

18.1.2014
Its wall to wall crazies in a panic out there!
Original video suggesting that Fukushima is responsible for the high levels of radioactive 'contamination' on the beaches in the Bay Area of California.

Personally I dont believe a word of it. Firstly because there's quite a lot of naturally occurring uranium, thorium and radium in california, secondly because beaches are one of the places where geological reworking can happen (eg filtering by density), thirdly because black magnetic sand on those beaches killed one of my remote controlled FPV planes, and magnetic black sand is well known for containing elements like thorium, and lastly, some folks with a energy sensitive radiation meter have claimed to visit this beach and showed that the actual radiation in this instant was coming from thorium.

13.3.2012
Promoting produce from Fukushima, a Tokyo store lists the cesium levels beside the price -- just one way life has changed a year after an earthquake, tsunami and nuclear accident struck Japan. In the final report in his series, Miles O'Brien examines food-safety concerns and a cottage industry of testing groceries for radiation.


MAKE THIS VIDEO VIRAL,RATE, COMMENT, FAVORITE, SHARE.
太平洋からマグロの魚は、放射性です（福島死の灰による汚染）
Buy your Canned Tuna, Now?
Long term radiation effects, in Tuna?
With many of the long term effects from the Japanese Fukushima Daiichi nuclear power plant disaster still ahead of us, a serious consideration should be made regarding the food chain and the possible radioactive contamination thereof. In this example, let's look at Tuna fish. Is it safer to buy canned tuna now, before possible contamination into its food chain?
They spawn in the Western Pacific between Okinawa and the Philippines and the Sea of Japan and they migrate over 6,000 nautical miles to the Eastern Pacific, eventually returning back to their birth waters to spawn again.
What do Tuna eat?
Tuna mostly eat small fish ranging from 1.5 inches up to 6 inches. Tuna will also eat squid, and very occasionally will consume crustaceans.
The small fish that tuna will eat include skipjack herring, flying fish, lancetfish, puffer fish, triggerfish and rabbitfish.
60% fish
20% squid
15% crustaceans
If tuna eat smaller fish like Herring, then what do the Herring eat?
Herring (a.k.a. trash fish) eat mostly plankton, as well as algae and some kelp.
If tuna eat squid, then what do squid eat?
Squids are carnivorous. The smaller species of squid mostly eat shrimp, and other small fish.
How could radiation enter the fish food-chain?
So now that we have an idea of what type of tuna is caught off Japan, and what it is that the tuna eat, lets hypothesize how radioactive particles could be ingested into this food chain.
We know that they have been dumping tremendous amounts of radioactive water into the Pacific ocean. This is the water that they have been spraying onto the reactors, fuel rods, and fuel pools while trying to keep them from entirely melting down. The problem is, there has been partial meltdown and the radiation is traveling with the water runoff, which is currently being dumped into the ocean (some water is being diverted into storage tanks).
Of much higher concern is Cesium-137, which has a half-life of 30 years (considered gone after 300 years). Of even higher concern is Plutonium-239 which has an unimaginable half-life of 24,000 years (considered gone after 240,000 years).
The radiation in the seawater is surely getting diluted, however fish are swimming in the water, and the diluted particles of Cesium and Plutonium will remain somewhere in the oceans for 300 to 240,000 years. Do you know how fish stay alive? They constantly are passing water through their mouths into their gills -- never ending.
Not only do little fish stay alive this way, but also big fish. So, not only will big fish get their own radiation through water injection through their gills, etc... but the big fish also eat the small fish. Effectively then, they are getting More radiation.
The big fish are then caught for processing, distribution and consumption by humans.
Where does the 'canned' tuna come from?
About 68 percent are caught from the Pacific Ocean, 22 percent from the Indian Ocean, and the remaining 10 percent from the Atlantic Ocean and the Mediterranean Sea
When you open a can of tuna, you don't know where the actual tuna was caught.
Odds are of course, that the tuna in that particular can may not have been caught off the shore of Japan -- it could have been caught in any other number of places in the Pacific. Lots of these tuna migrate their way to the west coast U.S., but it takes awhile -- years in some cases.
No doubt the food supply chain will be examined further as time goes on, particularly if the situation continues to worsen at the Fukushima nuclear plant (It's already a level-7, the highest on the nuke disaster scale). True results may not be measured for many years to come while looking back at cancer rates.
No amount of radiation ingestion is 'OK' though. A single Cesium-137 particle stuck in your body could start the chain reaction that leads to cancer.

28.8.2015
The mass media warned you with this video in May of 2012. RADIATION IN FISH IS MUCH HIGHER NOW! FUKUSHIMA FISSIONING HAS NOT STOPPED! Studies shown fish gathered from Pacific had cesium Fukushima radiation contamination. Still many people eating sushi are not too concerned. Some even thought glowing Sushi would be cool as they could eat in the dark. I want to stress this is old news and the radiation levels now found in fish are likely much higher!

OPG plans to bury and abandon radioactive nuclear waste right beside the Great Lakes, drinking water for 40 million people. If you think this is a bad idea, then please sign the petition and share!
http://stopthegreatlakesnucleardump.com

For more news that the media ignores check out


All Fish from Pacific Tested Positive for Fukushima Radiation


TUNA IS KILLING US THE CAUSE IS FUKUSHIMA


Officials: Fukushima Has Now Contaminated 1/3 of the Worlds Oceans 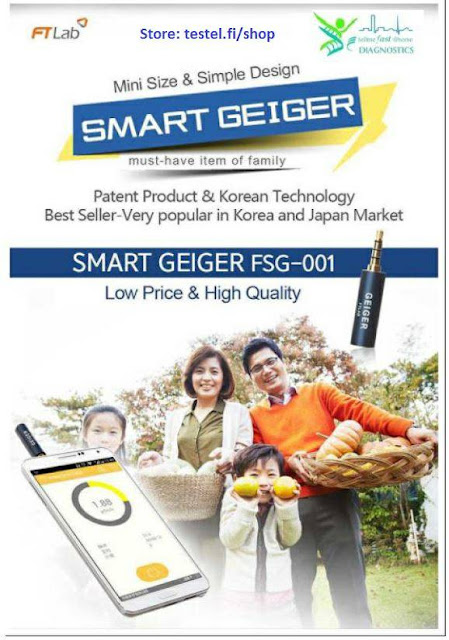