The Dark Roots of the “Brussels EU” - EU Facts

The Dark Roots of the “Brussels EU”

This article highlights the birth place of the "Brussels EU" on the drawing boards of the Nazi/IG Farben-coalition for a post-war Europe under their control. It is an excerpt of thespeech by Dr. Rath on the occasion of receiving the "Relay of Life" award from survivors of the Auschwitz concentration camp. 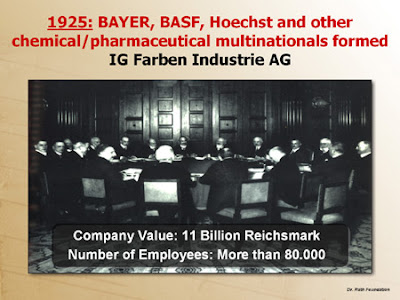 The corporate preparations for World War II started as early as 1925, when Bayer, BASF, Hoechst and other German multinationals formed a cartel called “IG Farben Industry”. The declared goal of this cartel was to obtain control of the global markets in the key industrial sectors of chemistry, pharmaceuticals and petrochemicals. Already in 1925, when this cartel was founded, its corporate value surpassed 11 billion Reichsmark and it employed more than 80,000 people. 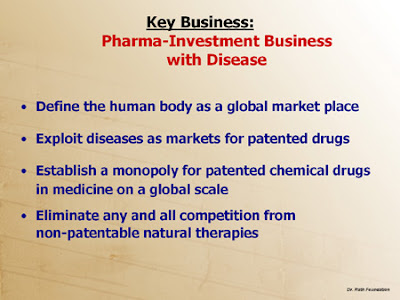 One of the strategic industries for which IG Farben sought global control was the pharmaceutical “investment business”. They knew that the pharmaceutical industry is not primarily a health industry, but an investment business that defines the human body as its marketplace. While presenting itself as the purveyor of health, the entire existence of this investment industry has been based on the continuation and expansion of diseases as multibillion dollar markets for patented drugs.
The precondition for establishing a global monopoly for this investment business with patented drugs was the attempt to systematically eliminate all non-patentable natural therapies. 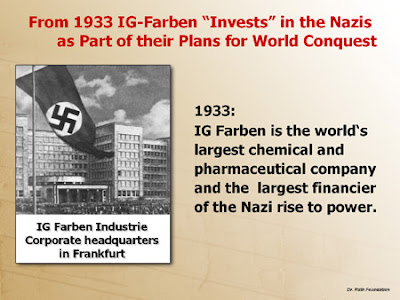 In 1933 IG Farben became the largest financier of the Nazis rise to power. And in the following years this German chemical/pharmaceutical cartel became the corporate accomplices in the preparations for the military conquest of Europe. 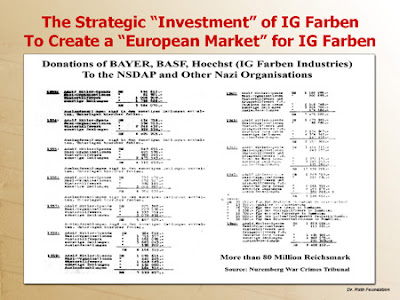 The records of the Nuremberg War Crimes Tribunal document that Bayer, BASF and Hoechst gave more than 80 million Reichsmark to the Nazis and their sub-organizations. In return for this “investment” IG Farben took over the chemical, pharmaceutical and petrochemical industries in the countries occupied during WWII with the ultimate goal to create and dominate a “European Market” form Lisbon to Sofia. 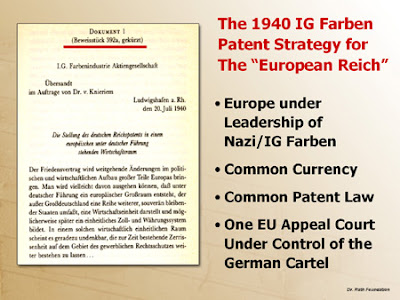 This document from the Nuremberg War Crimes Tribunal, a letter written by IG Farben director Knieriem to the Nazi government on July 20, 1940 - shortly after the victory over France - outlines the tools by which IG Farben intended to cement its key role in Europe . 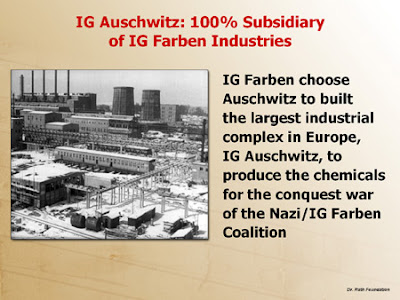 In Auschwitz , IG Farben built the largest industrial complex in Europe to produce the chemicals and explosives for the WWII Eastern front.
This 24 square kilometer industrial complex - as well as the massive expansion of the nearby concentration camps as a reservoir of slave labor - was financed with credits of almost one billion Reichsmark by Deutsche Bank. 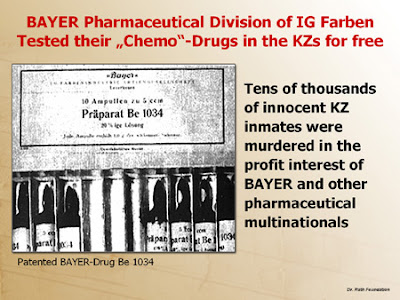 Bayer’s pharmaceutical division was using the thousands of prisoners in deadly experiments to test their patented chemicals as “chemotherapy.” 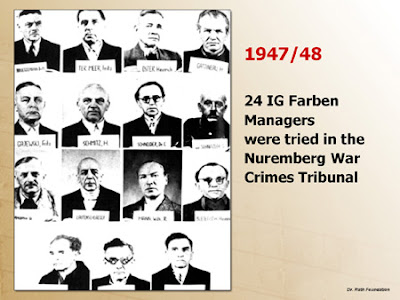 During the Nuremberg War Crimes Tribunal 24 managers of IG Farben Industry were tried for crimes against humanity and many of them were sentenced. 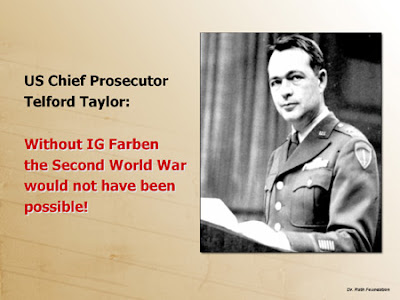 US Prosecutor Telford Taylor summarized the role of this chemical cartel during the Nuremberg Tribunal in the following way: without IG Farben, the Second World War would not have been possible. 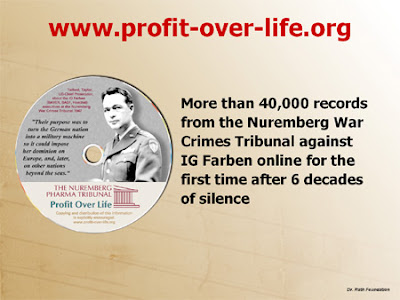 For six long decades the records of the Nuremberg Tribunal against the managers of the IG Farben Cartel were hidden away in archives. In July this year, our foundation got access to these files and published over 40,000 pages of this important tribunal on the Internet. From now on, everyone, school children and adults alike, can read and study these important documents online anywhere in the world. 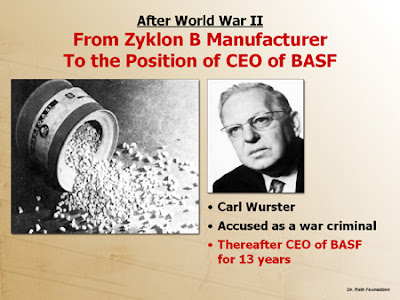 With the beginning of the Cold War, some of the IG Farben executives that stood trial in Nuremberg were reinstated into the highest positions of German industry. Karl Wurster, chairman of Degesch - the manufacturer of Cyclone B for the gas chambers of Auschwitz - became chief executive of BASF. 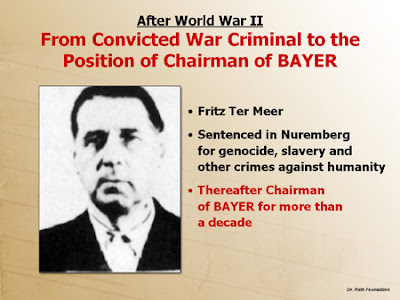 Fritz ter Meer, the Bayer and IG Farben director convicted in Nuremberg for genocide and slavery crimes committed here in Auschwitz , was released from prison after only four years.
10 years after he was sentenced as a war criminal in Nuremberg he was chairman of the supervisory board of Bayer again. 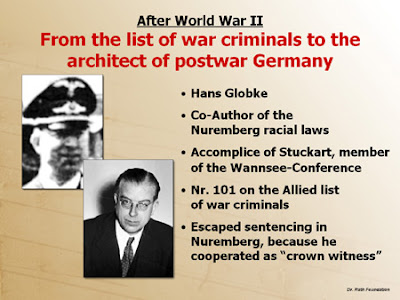 Hans Globke had been co-author of the Nuremberg racial laws and had also been responsible for writing the new laws of the Greater European “Reich” in the countries occupied by the Nazis during World War II. 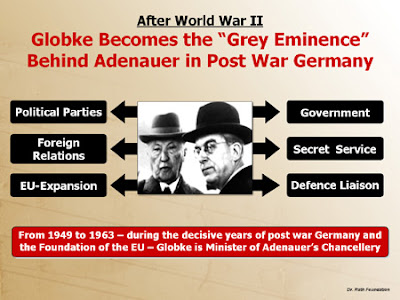 After the Second World War Globke became minister of the Chancellery in German Chancellor Adenauer’s office. As the “gray eminence” and outside of any parliamentary supervision, he controlled essentially all aspects of political life in postwar West-Germany from the Secret Service to the continuation of the plans of the oil and drug cartel to conquer Europe under the newly constructed EU. 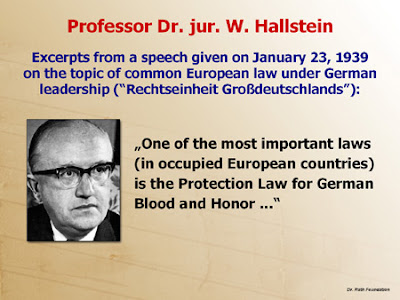 Walter Hallstein, a prominent law professor under the Nazis stated in a speech in 1939: “One of the most important laws (in occupied European countries) is the ‘Protection Law of German Blood and Honor’….” 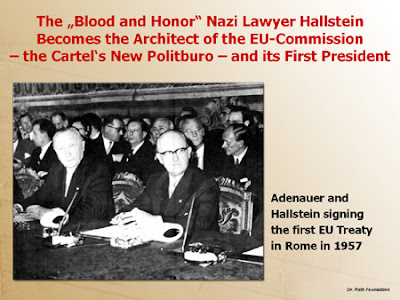 In 1957 the same “blood and honor” lawyer became the key architect of the European Union’s basic structure and the first head of the “European Commission” – the executive body of the EU designed from the beginning to rule Europe outside any democratic control. 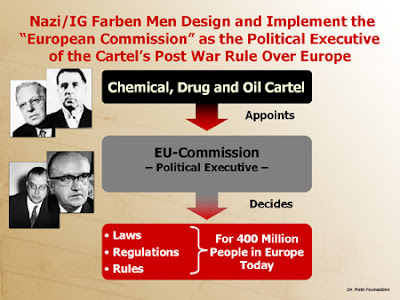 In summary, Nazi and IG Farben men designed the European Commission as the “Politburo” of the Pharma Cartel’s postwar rule over Europe . 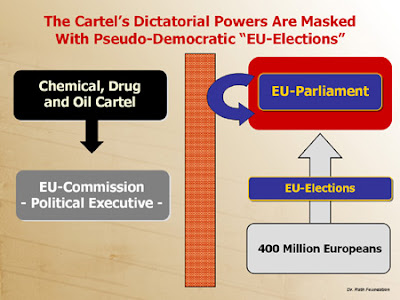 As a direct result of the influence of these interests, the decisions of the European Parliament have little, if any, influence on the laws and on the so-called “EU directives” imposed by the “EU Commission” on the lives of 400 million people in Europe .
At the same time, the elections for the European Parliament are little more than a masquerade, deceiving the people of Europe by portraying the EU structure as a democratic system. 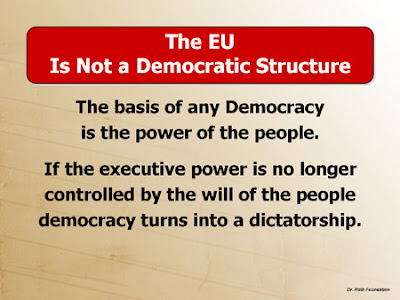 The basis of any democracy is the power of the people. If the executive power is no longer controlled by the will of the people, democracy turns into a dictatorship. 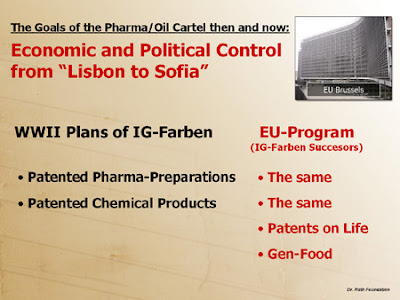 Today, the shadows of IG Farben are still lingering over Europe .

The goals of the IG Farben successors are today joined by oil and drug multinationals from other European countries.
But their goals remain the very same as those of IG Farben during WWII: to establish and control a European market from “ Lisbon to Sofia ” with patented pharmaceutical drugs and other patentable high-tech products.
The vast areas for which these corporate interests seek control today cover ever more areas of society and touch every life on our continent.
They include patents on genes - in order to gain control over the very molecules of inheritance and life - and patents on genetically modified plants with the goal to gain control of our daily nutrition. 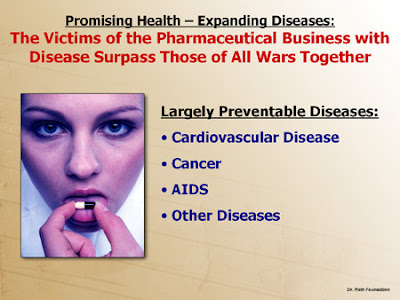 The most well-known among those industries that seek control over our lives is the pharmaceutical “business with disease”.

As mentioned before, this industry is based on the promise of health, but its entire existence depends on promoting diseases as markets.

We know today that cardiovascular disease, cancer, immune deficiencies and other diseases are largely preventable. Their deliberate perpetuation for corporate gain of the pharmaceutical drug business is a crime.
As a result of the unethical business practice of this industry, the number of victims of this fraudulent business model has exceeded one billion people and has surpassed the number of victims from all wars of mankind taken together. 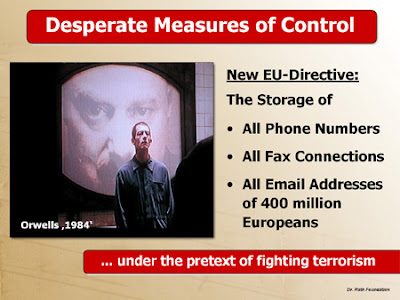 Under the pretext of fighting terrorism, the very same EU Commission has just issued a directive that will turn Europe into on “Orwellian continent”.

According to this EU-directive, from now on all telephone numbers you will call, all Email addresses you will contact will be stored.
And not only from you, but for 400 million people across Europe. It is not hard to understand what these tools mean in the hands of those interest groups that have so often abused their power in the past.