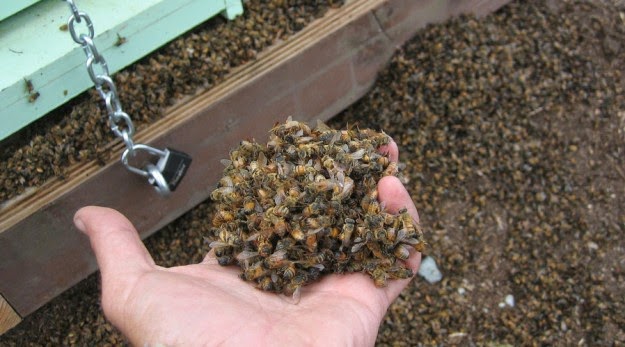 Bees’ importance to the planet cannot be overstated. The tiny, bumbling bee is responsible for pollinating one-sixth of flowering plants in the world, and also about 400 different types of agricultural plants.

In fact, it is estimated that just last year, the honey-producing pollinators helped provide over $19 billion worth of agricultural crops with their pollination services.
Globally, they are responsible for helping to create a $300 billion revenue.

Just based on those facts alone, it’s pretty clear that bees are important and need to be preserved: not just because they help keep the food chain flowering and producing food, but because they are a hard-working, selfless species that are incremental to the sustainability and the future of this earth.
But as has been shown multiple times in recent years - and in Ontario, Canada - certain agricultural methods which are far from sustainable are causing bee populations to decrease.

According to beekeeper Dave Schuit, who produces honey in Elmwood, Canada, he and his farm lost about 37 million bees (about 600 hives) once GMO corn started to get planted in the nearby area. “Once the corn started to get planted our bees died by the millions,” Schuit said.*
He and other beekeepers are blaming neonicotinoids, or “neonics” for the death of many of their bees. Although Europe has eliminated the use of neonicotinoid class of pesticides from its market, the USDA still hasn’t banned the chemical presently produced by Bayer CropScience Inc.
The reason pesticides containing neonicotinoids are banned in other countries is because they contaminate pollen and nectar, which in effect damages and kills insects like the bees. Two of Bayer CropScience’s most popular pesticides containing neonics include Imidacloprid and Clothianidin.
These drugs continue to be marketed, even though they have been linked with many large-scale bee ‘die-offs’ in both European and U.S. countries.
According to Nathan Carey, another local farmer near Ontario, Canada, he noticed the past spring that there weren’t enough bees, and he believes this is due to a strong correlation between the death of bees and the insecticide use.
However, as Snopes* was quick to point out, the GMO crops themselves remain 'unproven' to be the cause of colony collapse. What is more likely, according to the site, is that "the neonicotinoid pesticides are coating corn seeds, and with the use of new air seeders, are blowing pesticide dust into the air when planted." Either way, it is due to unsustainable farming methods that bees are dying in rapid numbers.

Worldwide, bees are in decline; but when a little common sense is applied, it doesn’t seem like too much of a mystery.
When scientists tested samples of bees, wax, and pollen, the found presence of 121 pesticides. Such finding lends credence to the theory that pesticides are contributing to CCD. “We believe that some subtle interactions between nutrition, pesticide exposure, and other stressors are converging to kill colonies,” said Jeffery Pettis, of the ARS’s bee research laboratory.
Another study found that neonicotinoid pesticides kill bees by damaging their immune system which makes them unable to fight disease. After a large loss of bees, Imadacloprid has been banned for the use of sunflowers and corn in Canda, but will it be enough to help revive bee populations?
Slowly, countries around the world are waking up to the danger of neonicotinoids. France has now rejected Bayer’s application for Clothianidin, and Italy has banned certain neonicotinoids as well. The European Union has also banned a list of pesticides, while the United States has yet to follow suit, however.
What is clear is that something must be done to help preserve and revive the bee population worldwide before it is too late.
Sources: Snopes Truth-Out

In 2008 neonicotinoids came under increasing scrutiny over their environmental impacts starting in Germany. Neonicotinoid use was linked in a range of studies to adverse ecological effects, including honey-bee colony collapse disorder (CCD) and loss of birds due to a reduction in insect populations. In 2013, the European Union and a few non EU countries restricted the use of certain neonicotinoids. // http://en.wikipedia.org/wiki/Neonicotinoid
Lähettänyt GraviolaTeam Finland klo 6.18