Science has once again shattered the myth that milk makes strong bones. 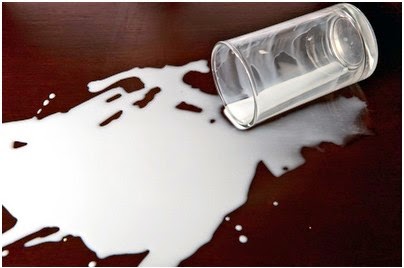 A new Swedish study links drinking milk to higher rates of bone fractures and even death.[i]
The study tracked the eating habits of over 60,000 women for 20 years and over 45,000 men for 15 years. Researchers found that drinking more milk did NOT lead to lower risks of bone fracture.

Why does milk lead to more broken bones and higher death rates?

Researchers found that milk drinkers had more biomarkers for oxidative stress and inflammation. They suggested that high levels of two sugars in milk – lactose and galactose – were the cause.  In fact, they noted that low doses of D-galactose are often used in animal studies to induce signs of aging.  Studies link D-galactose to a shortened life span, oxidative stress, chronic inflammation, neurodegeneration, decreased immune response, and gene transcriptional changes.  The dose used to obtain those results in animals is equivalent to a human drinking one to two glasses of milk per day.
Milk may be high in calcium but too much calcium can break your bones.
If milk doesn't build strong bones, what does?  Here are 10 foods proven to be a better choice for reducing your fracture risk and keeping your bones strong.
1. Yogurt.
The Swedish study found that fermented milk had the opposite effect on your bones as drinking plain milk.  For each serving of fermented milk products women reduced their hip fracture and death rates by 10 to 15%.  Examples of fermented milk products include yogurt, kefir, and sour cream.  Fermented dairy was also linked to lower oxidative stress and inflammation.
2. Cheese.
Like fermented dairy the Swedish researchers found eating cheese also lowers fracture and death rates.  Cheeses are also rich in vitamin K2 which is essential to strong bones.  The best choices with the highest levels of vitamin K2 are Gouda, Brie, and Edam.  Other good cheeses for your bones include Cheddar, Colby, Swiss, and Gruyere.  Stick to traditionally made cheeses and stay away from Velveeta, soy cheese, and other modern processed "cheese products."
3.  Natto
A traditionally fermented soy product popular in Asia, natto is another food high in vitamin K2.  In a study of 72 premenopausal women, researchers found that those who ate more natto had better bone formation.[ii]  And a University of Tokyo study concluded that natto consumption may contribute to the relatively lower fracture risk in Japanese women.[iii]
4. Green Tea.
The Mediterranean Osteoporosis Study showed that drinking up to 3 cups of tea per day was associated with a 30% reduction in the risk of hip fractures in women as well as men over 50 years of age.
And researchers from Texas Tech University showed that 500 mg of green tea polyphenols improves bone health after three months and muscle strength at six months. That's about what you get in four to six cups of green tea.  The green tea compounds support osteoblast activity (bone building) and suppress osteoclasts activity (bone breakdown).[iv]
5. Prunes.
Florida State University tested bone density in 100 menopausal women over 12 months.  Half were told to eat about 10 dried plums a day.  The other half ate dried apples.  Researchers found the prune eaters had significantly higher bone mineral density in the forearm and spine.  Other studies showdried plums slow bone loss.
6.  Pomegranates
Pomegranates are known to relieve symptoms of menopause including bone loss.  In a 2004 study in the Journal of Ethnopharmacology, rats who had their ovaries removed suffered accelerated bone loss, a typical symptom of menopause.  But when they were fed an extract of pomegranate juice and seeds for just 2 weeks, their bone mineral loss reverted to normal rates.[v]
7.  Oranges.
Osteoporosis has been called "scurvy of the bones" because lack of vitamin C has been linked to brittle bones.  In animal studies feeding rats orange pulp significantly improved bone strength. Other studies show bone mineral density is higher in women who supplement with vitamin C.[vi]  Eat fruits and vegetables high in vitamin C for bone health.  Choose oranges, strawberries, papaya, Brussels sprouts, bell peppers, cantaloupe, pineapple, kiwi fruits, and cauliflower.
8.   Black Seed (Nigella Sativa)
In animal studies researchers showed that nigella sativa can reverse osteoporosis.
9.  Cumin
A 2008 animal study showed that cumin seeds inhibit loss of bone density and strength as effectively as estrogen.[vii]
10.  Chocolate
Bone density is linked to magnesium intake. [viii]   But magnesium levels in the bone decrease with age. [ix] Your body needs magnesium to convert vitamin D to its active form and absorb calcium. Only about 20% of Americans get the recommended daily amount of 420 mg of magnesium for men and 320 mg for women.
Dark chocolate has a healthy 176 mg of magnesium in a 3.5 ounce bar.  Look for chocolate that is organic, fair-trade, and as dark as possible with at least 70% cacao content.  The higher the cacao content, the lower the sugar content.
_
http://www.greenmedinfo.com/blog/milk-linked-fractures-10-better-foods-strong-bones?page=2

Margie King is a graduate of the Institute for Integrative Nutrition®. A Wharton M.B.A. and corporate attorney for 20 years, she left the world of business to pursue her passion for all things nutritious. Margie is the author of Nourishing Menopause: The Whole Food Guide to Balancing Your Hormones Naturally. She is also a professional copywriter and natural health, beauty and nutrition writer. To contact Margie, visit www.NourishingMenopause.com.
Lähettänyt GraviolaTeam Finland klo 16.02