PFIZER NOT OKAY WITH KILLING MURDERERS, ONLY PATIENTS

PFIZER NOT OKAY WITH KILLING MURDERERS, ONLY PATIENTS 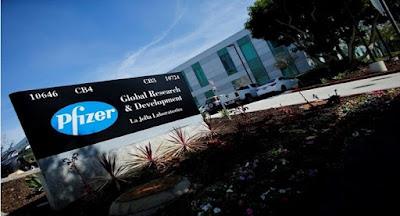 Heroically moral pharmaceutical company Pfizer is not okay with using any of its drugs to execute murderers.

That's good. The only people who are supposed to be killed by Pfizer drugs are innocent people. Not murderers. Maybe children.

A former Pfizer (PFE) employee's letter to a federal judge alleging that the company put a courier on a KLM flight to Nigeria carrying bribes for local officials is a classic example of how hard it is to get away with corporate skullduggery: The letter cites 40 Pfizer executives, FDA officials and other witnesses who allegedly have inside knowledge of the scandal -- not very secret for a secret conspiracy.
The letter is by far the most detailed account yet from a Pfizer executive about what happened during Pfizer's test of a meningitis drug on 200 children in 1996. Pfizer failed to get proper consent for the trial. Eleven kids died and the drug was eventually nixed for meningitis because it had a risk of complications.

But that could happen to any company.

Pfizer Inc's antibacterial drug Tygacil increases the risk of death whether used as authorized by the U.S. Food and Drug Administration or for unapproved conditions, the agency warned on Friday.

Pfizer Inc. said four patients died in a clinical trial of an experimental treatment for rheumatoid arthritis, but only one was determined by the investigators to be drug-related.
The New York company added that the death rate associated with the drug, across several studies, "is within the range of rates reported for biologic therapies" for rheumatoid arthritis.
The company needs successful new drugs to help offset an anticipated big revenue decline when its best-selling drug, cholesterol-lowering Lipitor, loses patent protection in November and becomes exposed to generic competition.

And apparently Pfizer kills dogs too.

Today, those TV spots are gone. The reason has to do with dogs like Montana. A six-year-old Siberian husky with stiff back legs, Montana hobbled out of a vet’s office in Brooklyn, N.Y., six months ago accompanied by his human, Angela Giglio, and a supply of Rimadyl pills. At first, the drug appeared to work. But then Montana lost his appetite. He went limp, wobbling instead of walking. Finally he didn’t walk at all. He ate leaves, vomited, had seizures and, eventually, was put to sleep. An autopsy showed the sort of liver damage associated with a bad drug reaction.
Pet drugs are big business — an estimated $3 billion world-wide — and Rimadyl is one of the bestsellers. It has been given to more than four million dogs in the U.S. and more abroad, brought Pfizer Inc. tens of millions of dollars in sales, and pleased many veterinarians and dog owners. But the drug has also stirred a controversy, with other pet owners complaining that nobody warned them of its risks.
Montana’s owner, Ms. Giglio, is among them. After she informed Pfizer and the Food and Drug Administration of her relatively youthful dog’s death, Pfizer offered her $440 “”as a gesture of good will”” and to cover part of the medical costs. Insulted by the offer and a stipulation that she agree to tell no one about the payment except her tax preparer, she refused to sign and didn’t take the money. “”There’s just no way in my conscience or heart I can release them from blame,”” she says.

Maybe Pfizer should just use its drugs for lethal injections and leave the Nigerian children and dogs alone.